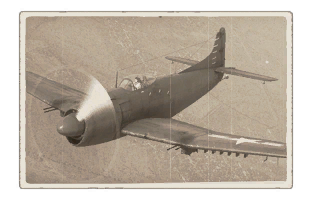 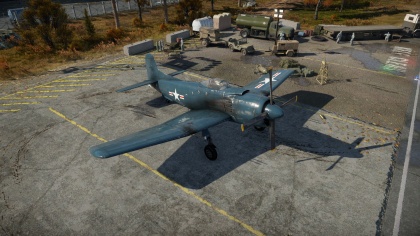 The pilot is protected in the front by 40 mm of bulletproof glass and in the back by 9.5 mm of steel. There are also two 9.5 mm steel plates under the engine and cooling system.

The aircraft has three self-sealing fuel tanks: one behind the pilot, and one in either wing root. Since the fuel tanks are not particularly large, and since they're all located in one location, fuel fires are unlikely in this vehicle. However, if a fire does occur, the centralized location of the tanks near all of the vehicle's critical components means that the fire is not likely to put itself out.

The AM-1 is a classic attacker, and it will come as no surprise that its manoeuvrability is lacking. It's fine at high speeds, but at low speeds, the aircraft quickly becomes sluggish, even when no payload is equipped. The plane also has poor acceleration and poor manoeuvring energy retention, all of which means that this plane struggles in a dogfight. If the pilot does find themselves in an engagement against a dedicated fighter aircraft, the best thing to do would be to fly towards a teammate who can help.

Where this plane shines is in a ground-attack role. The cannons, when using ground target belts, can take out lightly armoured targets quite effectively, and the high ammo count is certainly a nice bonus. Additionally, this plane receives an incredible number of ordnance options, from HVAR and Tiny Tim rockets to up to 5000 lbs of bombs. In Air Realistic battles these can destroy the most heavily armoured ground targets, and in Ground Realistic these allow the pilot to achieve 7 kills against enemy ground units without landing to reload.

This plane also receives three torpedoes for use in naval battles.

All in all, the AM-1 is a below-average fighter with incredible anti-ground capabilities. Although sluggish, it more than makes up for it in pure firepower.

In the 1930's and 1940's the Navy had two designations for carrier-based bombers: dive bombers and torpedo bombers, which each had a crew of 2-3 men. It was found during the war that more than 1 crewman was unnecessary, even in combat situations. In addition, if the two classes of naval bombers were combined into one aircraft, it would allow for a carrier's air group to have more flexibility and to increase the amount of fighters on the carrier. The Navy asked for design proposals for a multi-purpose bomber in 1943, and chose 4 designs to continue. These were the Curtiss XBTC, Douglas XBT2D Skyraider, Kaiser-Fleetwings XBTK, and the Martin XBTM. The Navy asked Martin to create a design using the Pratt and Whitney R-4360 Wasp Major engine as a backup to the Curtiss design, which the Navy feared was overly complex.

The XBTM-1 was a low-wing monoplane with folding wings for carrier storage, and conventional landing gear. It featured a single-seat cockpit with a teardrop shaped canopy right behind the engine. There was a 150 gallon fuel tank behind the cockpit. There was a dive break that ran the length of the trailing edge of the wing. The wing design was ideal for dive bombing, because of the large surface area, but the ailerons were much less efficient, as they were not wide. The pilot and oil cooler were protected by heavy armor. The primary armament consisted of four 20 mm T-31 cannons in the wings with 200 rounds per gun. Additional armament was suspended on one centerline hardpoint, and two outer hardpoints. These hardpoints could carry bombs, drop tanks, or torpedoes up to 2,300 pounds. The outer hardpoints could also take an AN/APS-4 search radar pod. 6 hardpoints could be added to the outer wings to carry 500 pound bombs or 5 inch rockets. After testing of the first two prototypes, slight modifications were made to the engine cowling, propeller, rudder, and vertical stabilizer. The BTM-1 was redesignated as the AM-1 in 1946.

The Navy ordered 750 BTM-1's in January of 1945, but changed the order to only 99 after the Japanese surrender in August. After the modifications to the design, and the re-designation to AM-1, deliveries began in March of 1947. A number of issues were found, including a badly layed out cockpit, tailhook issues, elevator control, and structural weakness of the fuselage. These issues were solved and mitigated. The Navy ordered 50 more AM-1's, known as the AM-1 Mauler. An electronic countermeasure version was created, known as the AM-1Q. The AM-1Q added an electronics operator in the fuselage, where the fuel tank used to be. The Mauler was found to be a hard to handle aircraft. It did not do well in carrier landings, and was hard to fly in a formation, plus it had maintenance issues. Despite this, it could carry more ordinance than the AD Skyraider, and was more stable when dive bombing.

The AM-1 was given to squadrons in the Atlantic Fleet. It served for a relatively short amount of time, as although the Skyraider could carry less secondary armament, it flew better, landed better, and was more reliable. In 1950, all Mauler's were moved to shore-based squadrons, but they were abandoned in the same year to Naval Reserve squadrons. They were retired from service with the Naval Reserve squadrons in 1953.

Best Combo #3 discusses the AM-1 at 3:18 - War Thunder Official Channel