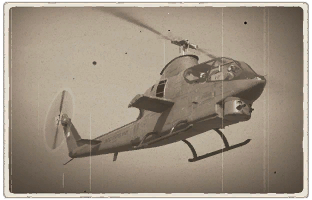 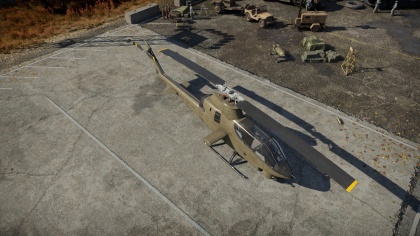 This helicopter, being the first Attack Helicopter in the American Tech Tree, is a manoeuvrable and powerful beast if used in the right hands. It has 7 armaments presets, most of which need to be researched. The AH-1G comes with one secondary weapon, 28 x Hydra-70 rockets.

When fighting the AH-1G, it is always a good bet to get the "High Ground" or altitude advantage of this vehicle. Try to strafe it and get around to its blinds spot, as it can't use the tail rotor effectively when moving. Always aim for the cockpit, as one the gunner is knocked out the turret becomes unusable. When coming up against a Cobra with gun pods, or and secondary weapons, know that the pilot can still fire these even if the Gunner in knocked out.

The AH-1G can carry up to 4 x 7.62 mm miniguns with a very generous ammo supply allowing it to put out an extremely dense amount of fire over an extended period. This should be used to the pilot's advantage when engaging enemy aircraft in the skies.

The standard armament of the AH-1G can be switched for a dual 40mm M129 grenade launcher (can be researched as a tier III modification).

Unlike other AH series helicopters, the AH-1G can equip either two 7.62 mm Miniguns or one 20 mm Gatling gun as suspended armaments. The minigun can pack a real punch when engaging enemy helicopters due to their light armour, however, the one drawback will be the pilot will have to deal with the massive recoil from the fast rate of fire.

The AH-1G can also serve in a ground pounding role by equipping FFAR rockets that can reload quite quickly while still being able to defend itself with its turret miniguns. While the AH1G cannot carry as much ordinance as its Soviet counterparts, it can defend itself very well and even equip suspended armament such as rockets, something which the Soviet choppers cannot do until BR 9.7. 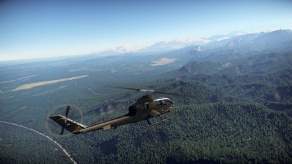 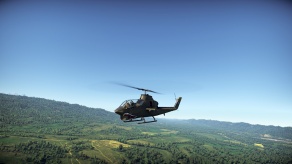 In helicopter battles, the AH-1G serves best in an anti-air role by combating other enemy helicopters. Due to being the only dedicated attack helicopter for the first half of the USA helicopter tree, it serves as the backbone for eliminating enemy air threats for US pilots until the AH-1F and AH-1Z become researchable.

The AH-1G is sluggish when it comes to climbing rate. This results in the vehicle being very manoeuvrable at low altitudes. Players should always save rockets for enemy vehicles that need it.

In-ground realistic battle, the AH-1G has the best loadout for 8.0 helicopter. The twin 40 mm grenade launcher is the best for dealing with tanks at a close range battle but should be very careful of any tanks or SPAA.

Parallel to the development of the UH-1 transport helicopter, Bell was actively conducting research on helicopter gunship designs. This resulted in the creation of the “Iroquois Warrior”, a mockup of a gunship design based on components from the UH-1B Huey. The mockup was presented to interested Army officials in June 1962, resulting in a proof-of-concept contract later that year. Following the contract award, Bell created the Model 207 “Sioux Scout”, which was evaluated by the Army in early 1964.

Although impressed by the Model 207, the Army sought a larger and more powerful design, resulting in the creation of a new competition of which Bell was not a part of. Instead, Bell independently continued developing and refining their gunship design, eventually creating the Model 209 - a design that was a combination of the Iroquois Warrior mockup and the concepts behind the Model 207.

Meanwhile, the ongoing Vietnam War sparked an urgent demand for dedicated attack helicopters. Although gunship versions of the UH-1 performed this role with relative success, the fact that they weren’t initially intended for this role somewhat limited their effectiveness. Back in the States, the Army’s ongoing competition produced no winning design as a result of technical and political difficulties. To quickly address their demand, the Army started looking for an interim design to act as a stopgap measure in 1965.

Soon after testing of the Model 209 concluded in September 1965, the Army decided to award Bell with a manufacturing contract later that year. The contract officially put the Model 209 into production under the Army designation of UH-1H Huey Cobra but was later redesignated to AH-1G Cobra.

The AH-1G Cobra entered service with the U.S. Army in 1967, participating mainly through the remainder of the Vietnam War as well as other conflicts. The AH-1G was retired from active service in the early 1980s, being replaced by newer models of the Cobra.