Difference between revisions of "AD-4" 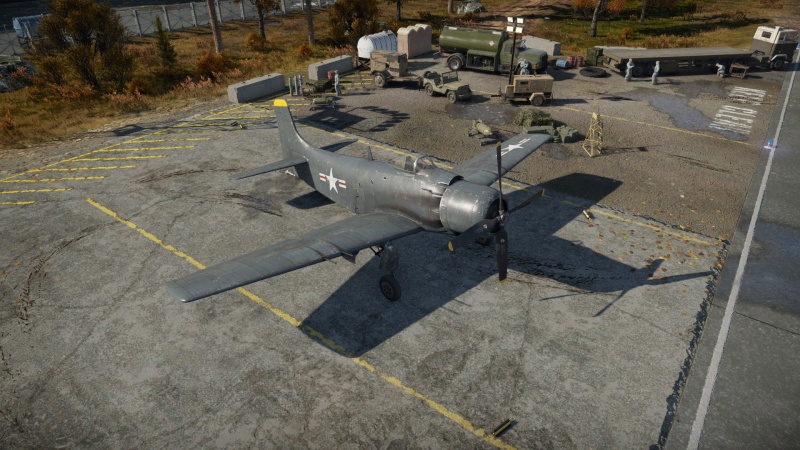 The AD-4 is a thorough-bred ground attacker. It can be armed with a slew of deadly anti-ground weaponry ranging from several high payload bombs and HVAR rockets to a massive 56 Mighty Mouse rockets capable of pinpoint precision and deadly effect. Though lacking in flight performance, the AD-4's armament allows the pilot to annihilate anything that ends up in front of his guns; destroying enemy planes in very few hits and being able to destroy even light pillboxes and light tanks with the right ammunition. If there are ground targets to be destroyed, the American tree can offer no better attacker aircraft.

The AD-4 is generally a sluggish aircraft, which should come to no surprise considering the engine output and weight of the aircraft. In sustained horizontal turn fights and all energy fights, the AD-4 will be out-manoeuvred quickly. Whilst it has speed, the AD-4 has a surprisingly high turn rate, though the high weight causes energy retention to be perhaps one of the worst of any aircraft in War Thunder.

Considering the size, weight, and engine of the aircraft, the AD-4 still maintains a good top-end speed and gets there in a reasonable time, though nowhere as fast as comparable fighters get to theirs. Skyraider pilots will find their plane able pull a great instantaneous turn rate to keep up with fighters or other aircraft that end up on the business end of the AD-4's cannons, though their plane will very quickly lose a lot of speed thanks to its incredibly high weight. Sustained turns are not a strength of the AD-4 by any means, and the introduction of any verticality into manoeuvres will emphasis this weakness even further; the plane has rather terrible energy retention.

As an attacker, your priority is on obtaining more effective ground attack ordinance.

Start off with Offensive 20 mm, to unlock Universal belts with a higher composition of API-T shells for ground attack.
Then, research SBC mk.I, to unlock the 12 x HVAR & 500 lb bomb combination.

The following depends on whether your preferred play style will be either Air or Ground attack:

56 Mighty Mouse rockets can be potentially used to destroy 23 tanks or light pillboxes, no other ordnance can compete. This makes it the obvious and only choice for grinding with the AD-4 in Air.

FFARs may be accurate, but their post-penetration damage versus ground forces vehicles is pathetic. The large 2,000 lb and 1,000 lb bombs available to the AD-4 are much more reliable at destroying in general, and HVARs have far superior destruction power when they hit.

The AD-4 can be outfitted with the following ordnance:

In an air match, you need to know where the most important targets are and immediately make a beeline for them. Using your weight and air-spawn, you can reach a relatively high speed for your airframe of 500 - 600 km/h in an extended shallow dive. Once at the objective area, your mission is to destroy as many vehicles that contribute to your team's victory as possible before enemy interceptors reach you. If possible, use your FFAR rocket payload, as they are incredibly accurate and are able to destroy light pillboxes and all ground vehicles in one direct hit. You can also use your AN/M3 cannons' API-T rounds to penetrate and destroy light pillboxes and light tanks. If this is your goal, use the Universal ammo belt if unlocked, as it means every other round is API-T. Ground targets use two API-T, then a HE-T and a P round, so it is not as effective versus aircraft while being no more effective against ground targets than Universal.

ALL fighter aircraft have a massive advantage they can exploit against you to easily defeat you. Jets, especially the Me 262, have speed, energy retention and heavy armament that make it hard for you to win in a head-on or get your guns on target outside of one. If you're fighting against one, you don't have much of a chance other than to try and snipe them in a head-on before they get their rounds down range. Remember that the Me 262's guns have a notably low muzzle velocity. For propeller fighters, your tactic is the same and has a higher chance of succeeding thanks to your opponents generally weaker armaments and slower speed.

The AD-4 has a great burst horizontal turn rate, and can even compete with some of the poorer turning fighters when not laden with armament, though bleeds energy incredibly fast. When attempting to engage an AD-4, use the vertical to your advantage, the AD-4's incredibly high weight makes it almost impossible for it to fire on anyone above them as they will almost immediately lose all momentum.

The most important piece of information to keep in mind while attacking an AD-4; do NOT go into a head-on versus the plane. The AD-4's inability to get guns on target easily is mitigated if they can commit to a head-on, and with four AN/M3 cannons alongside a relatively tanky structure the AD-4 will have a high chance of critically damaging you and escaping to repair.

The AD-4 Skyraider was an improved model of the AD-3. The main improvement came with a more powerful R-3350-26WA engine. It also featured stronger landing gear and an improved radar. The armament was increased to four 20 90mm cannons. Provisions were added for 14 Aero rocket launchers. 372 AD-4 Skyraiders were built.

AD Skyraiders made up the bulk of the Navy's ground strike sorties. The only Skyraider air-to-air kill during the war occurred on 16 June 1953. A USMC AD-4 from VMC-1, piloted by Major George H. Linnemeier and CWO Vernon S. Kramer, shot down a Polikarpov Po-2 biplane in that action. Often painted blue, the Skyraider was nicknamed the "Blue Plane" by enemy forces during the Korean War. Many Skyraiders were shot down by ground fire during the war while flying low-altitude ground attack missions.

Skyraiders later participated in the Cathay Pacific VR-HEU Incident and the Vietnam War.