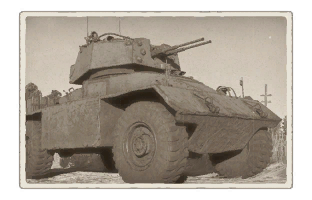 The Armored Car Mk II AA is a Rank II British Self-Propelled Anti-Aircraft Gun with a battle rating of 2.7 (AB/RB/SB). It was introduced in Update 1.55 "Royal Armour" along with the rest of the British tree. When you en counter someone that can't Pierce your armour, you can't kill him, but you can inmobalise them by hitting their tracks, and then you should either wait until an allied vehicle comes, drop artillery or aim to weakspots, you may choose one of these depending on the target.