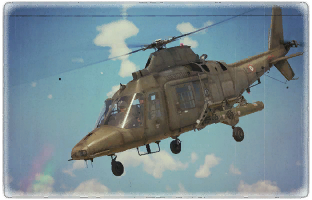 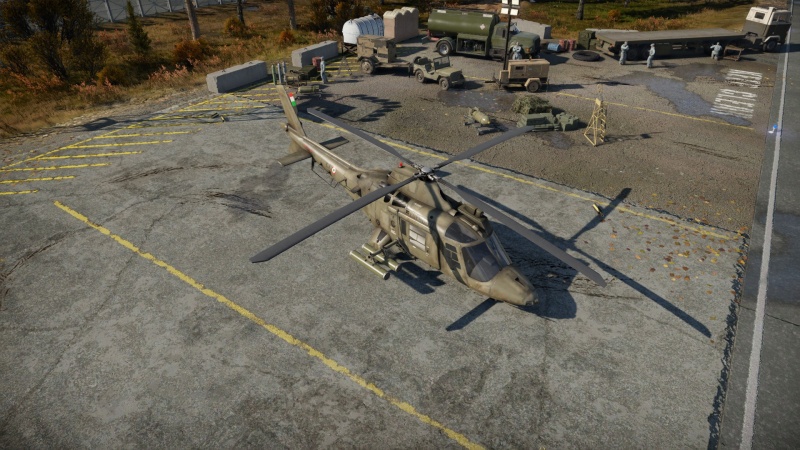 Outfitting the A109 with general payload options (TOW ATGM's, rockets, gun-pods) does not make the helicopter any slower than its adversaries, in fact at times you'll easily be one of the fastest helicopters on the battlefield. The A109 is at times able to do manoeuvres other helicopters can only dream about, even with full payload options. In Ground RB matches however, there should not be many times you'll have to move too much to avoid enemies. You are able to to get good positions thanks to your speed and at times, if done right, you will be able to dodge incoming missiles from ground anti-air or enemy jet aircraft.

The A109 is not very survivable, like many helicopters above and below its battle rating, it is prone to exploding into many pieces after a hit from an anti-air missile or a barage of anti-air fire. It does have some armour on the cockpit area, but in battles that won't really protect you from anything you'll face. If your enemy is not very accurate and manages to damage you without hitting key components of your helicopter, you might luck out and be able to make it back to the base to repair. It is advised that you stay away from machine gun fire too, generally just stay away from everything that poses a threat, this is the only way to truly maximize your survivability.

The A109 is a great helicopter for its battle rating, at 9.0 there great line-up options to pair the helicopter up with, and if you manage to get down-tiered you just might be able easily dominate the game. For Ground RB, it is recommended you bring in a light vehicle able to scout, with access to the "Air strike" modification. This will mean that once you have captured a point, and scouted a vehicle, you'll be able to get into the helicopter with TOW-2's (once you've researched them) straight away if you happen to get knocked out early. This is the best strategy as if you manage to pull it off inside a match that has only just started, you will likely surprise unsuspecting enemies who might think it's still to early to worry about enemy aircraft. At 9.0 you have access to the Centauro Romor, so this vehicle will be the one in which you should use to quickly get inside a helicopter.With enough spawn points, you can bring the best overall load-out for the A109: 4 x BGM-71C Improved TOW missiles + 14 x FFAR Mighty Mouse rockets. With the TOW ATGM, you'll easily be able to pick off players from a distance. If spawning in during the early minutes of a match, the TOW will be a dangerous weapon for pretty much any enemy vehicle you'll be able to hit. Do keep in mind who exactly you are choosing to engage, as you'll realise soon enough that killing a player with spawn points backed up will usually lead them to spawn in either as an anti-air ground vehicle or an aircraft. In that case you'll get overwhelmed with everything you need to watch out for, which will lead you to be less effective in the CAS department for your team. If you run out of TOW's during your match, it is advised you return to base to get rearmed. You only have access to 4 of them so every shot you take counts. If not, and you haven't had the chance to use your rocket pods yet, there can be situations where you'll be able to utilize them whilst still being useful to your team. With rockets, you'll need to stay low to avoid any incoming SPAA. You'll need to do that as the helicopter is not very armored, so most if not all ground targets will easily make short work of you if you are not careful. Generally speaking sticking behind mountains or tree lines will suffice. Once you feel you've gotten close enough to the battlefield, it's time for you to come out, quickly find your targets, and engage. This might pose a challenge as the A109 doesn't have access to many rockets, so you'll need to pick your targets carefully and make sure most of your shots actually land and hit your targets. The A109 doesn't have any main cannon/machine guns but it is good to note you are able to bring in gun-pods in replacement of the rockets, honestly these gun pods won't be very effective against ground targets, but they should be more than enough to defend yourself from incoming enemy air vehicles. Against enemy air vehicles that'll be your only line of defense, as the A109 currently does not have access to air to air missiles or flares/chaff, so if you're not careful you could become a very easy kill for them. The main problem with trying to engage at close range is that doing so in most cases will put the A109 in huge amounts of danger. Survivalbility features of the A109 are poor, as previously mentioned enemy tanks and SPAA's will be able to quickly destroy the helicopter with their main guns or machine guns, so it is recommended that you only get into the actual battlefield near the end of the battle, once most threats you'll encounter will not be present, or at the very least, threats that can be dealt with safely.

In Arcade Assault, you won't have to worry about going back to base to reload your weapons as they will automatically replenish once every munition has been used up. It's recommended you bring either TOW ATGM + rockets, or rockets + gun-pods, or a full loadout of rockets. This is so to maximize your overall effectiveness for your team.

When playing helicopter battles, your best shot at staying alive and being effective is to bring a load-out of gun-pods and rockets. The gun-pods you have access to are usually able to deal with most helicopter you'll be facing, due to many of them not being very armored. With rockets, you'll be able to take out ground AI targets. Usually, they will take 1 or 2 shots at minimum to destroy. Rockets are also quite effective in close range as a last ditch effort to come out on top when fighting a 1v1. Try stay away from any helicopters with air-to-air missiles as you'll more than likely get destroyed, best way to maximize your efforts in this game mode is by trying and flanking the enemy side of the map and getting rid of ground targets undisturbed.

During the 1960s, Agusta was looking to break through the export market by designing the A109. Mainly intended for commercial use and a civilian market, it would be also later be tailored during development to the military market. It was redesigned in 1969 as there was a need for twin engines to actually compete with other contenders: this lead to the A109 to be fitted with 2 Allison 250-C14 turboshaft engines. From December 1968 until September 1969, at least 10 separate possible configurations were worked out. This lead to construction of the first three of the prototypes to carry out flight tests. In 1971, the A109 made its first maiden flight which yielded great results for the machine. The test flight was encouraging both in regards the reduction of vibration and handling qualities, and the overall advantage achieved by adopting an articulated four-blade rotor. Noise abatement was also promising, with an especially designed markedly tapered leading edge of the blade tip section. Testing was halted following a minor accident but quickly resumed in 1972 with to the demand and interest of many countries. Finally, in 1973, the first ever military prototype was presented along with its possibile configurations, This officially changed the vehicle from being centered only for civilian use, and allowed it to gain the reputation of also being for military purposes. Many tests were conducted on the military versions of the A109, the first set of armaments being equipped on them were Hughes Aircraft-built anti-tank TOW missiles. The A109 was also tested with a wide variety of rockets, machine guns and any weaponry that could be installed on the machine. Between 1976 and 1977, the tests that were conducted allowed 2 different military variants to emerge, one of them being for light attack/close support missions and the other one for shipboard operations. Once Agusta's helicopter was ready, many civilian versions of this aircraft started being exported around the globe, mainly in the Middle East and Africa. In Italy, the Army obtained the A109CM as the "A109EOA" utility/scout helicopter, with "EOA" standing for "Elicottero d'Osservazione Avanzata". This helicopter's entry into service helped put out of service the very old Agusta-Bell helicopters that were, at the time, still used in a multi-role aspect. In Italian service, the A109 was able to carry rockets, various ATGMs, and gunpods. The launchers installed on the A109 allowed for the installation of TOW, ITOW, TOW2 and TOW2A missiles. Other armaments included 12.7 mm general purpose door-mounted machine guns on both sides of the helicopter, allowing the vehicle to be very versatile and well-defended. Initial variants of the A109 usually lacked any form of countermeasures, but would be installed in more modern variants of the helicopter. It was in service for a very long time, and was liked by the people who operated the vehicle. Some export variants of the A109 included special options such as the A109BA, which was exported to Belgium, equipped with 8 x TOW launcher instead of the 4 x one in service in Italy. Currently, 32 additional countries are using the A109 either in civilian or military configurations. The A109 keeps on being in service and continues to be upgraded to not lag behind other countries' types of helicopters till this day.

In the early 70's, the Italian aircraft manufacturer Agusta began testing a new multi-purpose helicopter, the A.109, which was originally created for the civilian market, but immediately drew the attention of the military authorities. A.109 EOA-2 is a reconnaissance version, designed to destroy various targets including enemy armored vehicles. In addition to machine-gun pods and rockets, the helicopter can be equipped with four TOW anti-tank missile launchers.