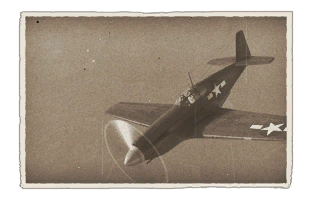 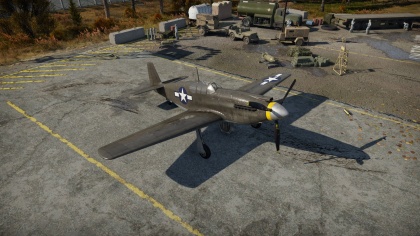 North American Aviation Company was busy during 1942 building and shipping Mustang Mk.I fighters to England to be incorporated into the Royal Air Force to fight alongside the Curtiss P-40 Tomahawks. Unfortunately for England, lend-lease funds ran out and 93 unshipped Mustang IA/P-51s went to the U.S. Army Air Forces. North American did not want to stop production of the P-51s and pressured the USAAF for a fighter contract. Unfortunately for the fiscal year 1942, no government funds were available for new fighter aircraft, however when observed that attack aircraft funds were available, North American reconfigured the Mustang into a dive bomber, outfitting it with heavier wings, bomb racks and dive brakes. With this dive bomber/attack variant approved for manufacturing, NAA ramped up production and cranked out 500 A-36A aircraft.

The A-36 was outfitted with the Allison V-1710-87 inline water-cooled engine which was a failure for high altitude flying, however for lower altitude dive-bombing, this engine performed quite well. High enough speeds could be developed in a dive to rip the wings, so dive brakes were implemented to regulate the dive speed to around 390 mph (630 kph). Maintaining speed in a dive ensures enough energy is available to zoom climb back up to altitude or to get away from any enemy fighters which may have attempted to intercept you. Depending on the map, if there are a significant amount of ground targets (anti-aircraft batteries, trucks, light tanks...etc…) the dive bomber can convert to a strafing aircraft once the bombs are released. With six 12.7 mm machine guns, softer ground targets are no match and will be easy pickings.

The A-36 has a configuration which few other aircraft (U.S. and foreign) can be outfitted with and that is two DGP-1 gun pods, with one being mounted under each wing. Each gun pod contains two more 12.7 mm M2 Browning machines guns with 340 RPG, bringing up the total machine gun count to 10 12.7 mm M2 machine guns with 2,700 rounds per load. En mass, these machine guns can produce devastating results both in the air and on the ground. While only two guns are mounted in the fuselage cowling, the other four (or eight if gun pods are equipped) are mounted in the wings and require the pilot to set convergence for best results. For those pilots which like to snipe from a distance, 500 – 650 m convergence may work best while those pilots who like to fight close quarters, a convergence of 250 – 350 m can be extremely devastating when all 10 guns bear down on the target.

As an early war multi-role aircraft, the A-36 can fit the play-style of just about any pilot and can be reconfigured to accommodate different maps and missions. Whether ground-pounding or dismantling aircraft with 10 guns at a time, the Apache (or Mustang as pilots typically referred to it as), this aircraft will help pilots to hone their skills and prepare for the rest of the Mustang series available to play in War Thunder. Don’t be surprised when heading towards an enemy aircraft that they immediately take evasive manoeuvres to get away from the A-36 as they fully understand what could be in store for them if they stick around. 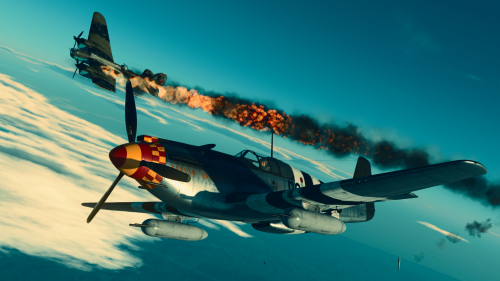 The A-36’s armour configuration does a decent job of protecting the pilot, especially in frontal or head-on attacks. From behind the pilot’s seat backs up to an 11.11 mm steel plate, however from the front, the canopy windscreen contains 38 mm bulletproof glass. There is also a 6.35 mm steel plate both in front of the engine and behind it between the engine and the cockpit. To get to the pilot, bullets from the front will need to pass through the first plate, the engine and then the second plate. The chances are the engine will be disabled before the pilot is knocked out in a head-on attack. The front-most steel plate will help to protect the engine from smaller calibre machine gun fire, however, it does not fare so well once you start going against +20 mm rounds which have a greater punch.

Keep up speed and manoeuvrability which will make it difficult for any enemy fighter to get a bead on you and the different steel plates should do their job in protecting the fighter from stray bullets. The A-36 when outfitted with gun pods can become an absolute terror especially during head-on attacks, however, don’t think that just because of the armour in the aircraft, you are fine. Remember when performing head-on or diving attacks on bombers fire off rounds and then manoeuvre as bullets headed your way in which you fly into will have a greater impact, it is imperative to move out of their way rather than take a chance and hope that a 6.35 mm steel plate will fully protect the engine or the pilot. 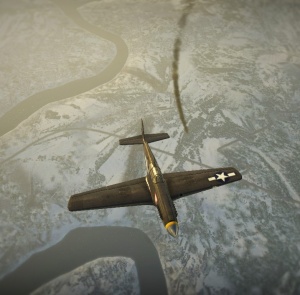 The A-36 is outfitted with six 12.7 mm Browning M2 machine guns, the good thing about this is that they are all the same type of gun and will all have the same amount of bullet-drop, making it easier to predict where the rounds will end up, the unfortunate thing is that two are mounted in the nose while two others are mounted in each wing. The unfortunate part of this is that the pilot now has to consider setting the convergence range to help make the shots more effective. Setting them too close or too far from the range the pilot typically shoots from will most likely guarantee some rounds will miss due to the over/under correction. A good middle range to configure for will be 400 m as this doesn’t require the pilot to follow too close behind, but the bullets still have a bit of punch, however for those pilots which take the fight in closer, a convergence of 200-300 m will concentrate all the rounds into a tight sphere with a solid kick usually dismantling critical components from the aircraft under target.

The A-36 can be outfitted with the following ordnance:

Though not what one would typically consider a dive bomber, the A-36 does make a really effective attack aircraft outfitted with 100, 250 or 500 lb bombs. Whereas larger attackers and bombers are typically slow and clumsy when it comes to aiming for a target, the Apache is the opposite and actually a pioneer for later fast, small, single-pilot aircraft to take on this role. The Apache is relatively comfortable at flying at 12,000 ft (3,660 m) or at tree-top level, however, it does excel when it comes to dive-bombing. Though the larger the bombs it carries, the less manoeuvrability it has, that doesn’t matter when it comes to diving on the target, here the only critical issue is not building up too much speed as the wing load can only take so much before the wings snap off. Typically the best method is to approach the target in a dive at about 70° and starting from about 10,000 – 12,000 ft ( 3,040 – 3,660 m), deploy dive brakes and line up for the target. When between 2,000 – 4,000 ft (610 – 1,220 m) release bombs, retract dive brakes, full throttle and pull up in a zoom climb.

The smaller 100 and 250 lb bombs are good for lightly armoured targets such as anti-aircraft cannons, trucks and light tanks. The 500 lb bombs should be reserved for more heavily armoured targets such as pillboxes, medium and heavy tanks or even many targets clustered close together. Though bases could be bombed, these bombs are relatively ineffective, however in a pinch, if all of the other smaller targets have been destroyed, feel free to drop bombs on bases to help rack up some points for ordnance dropped.

For those pilots who don’t have the patience for bombing runs and just want to tear up the playing field with machine guns, the DGP-1 gun pods will be the suspended weapon of choice. Extending the aircraft’s already six .50 calibre machine guns to 10 is enough do some serious damage both in the air and on the ground. The pilot will need to set the convergence to a comfortable distance which suites their needs, however, for those which like to get in close to other aircraft, setting convergence from 200-300 m will allow the ten guns to focus their rounds typically blowing off a wing, the aircraft in half or just pelting the critical components into failure. For those which will use the gun pods for ground-attack, having the convergence a bit farther out, say 500 – 600 m will allow for manoeuvring around the terrain and position for success rather than having to be right on top of the target before you can get a clean shot. The gun pods also allow the pilot to switch up tactics mid-match to air attack or ground attack and even switch back depending on target availability.

An A-36 taking advantage of the soft underside of an He 111 bomber.

The A-36 is quite a unique aircraft for its rank. It is a sleek looking fighter-bomber and should be used as such. It has good speed for its rank and designation, decent armament and a good selection of payloads; the A-36's role varies depending on the game mode you play.

Air Arcade and Air Realistic - In air battles, you can target ground forces with your .50 cals, equip bombs and take out medium or heavy tanks or you can specialise as a fighter. For a slight performance drop, you can equip the gun pods, which makes this plane absolutely formidable against any aircraft, especially during head-on attacks. Fighters and bombers alike will take heavy damage if not fully destroyed by the ten .50 calibre machine guns. Generally, it is best to focus on enemy aircraft in Air Arcade, while leaving the ground attack to more dedicated aircraft.

Ground Realistic - Ground RB allows you to really let the A-36 shine. It performs very well in the fighter-bomber role. If you equip bombs, you can quickly dive into battle, bomb a target and then begin engaging enemy aircraft. If you instead equip the gun pods, you should also equip the ground targets belt. The high amount of AP ammunition allows you to penetrate most German and Japanese vehicles through the roof, while the belt still retains high levels of effectiveness against aircraft, allowing you to be a true multi-role fighter bomber. The gun pods also allow you to hunt heavily armoured aircraft like the IL2. 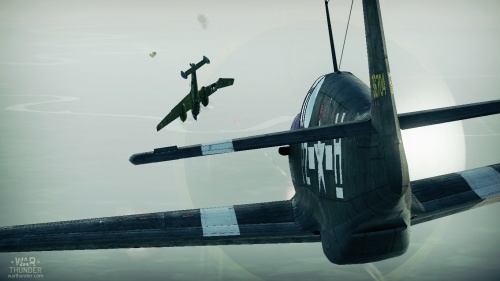 Well placed shots are enough to snap a bomber's wing.