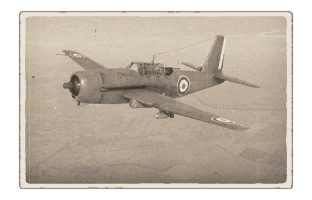 The A-35B is best used as a "swing fighter", switching between ground targets and slow, lumbering air targets as your bombs get used up. The typical American 6 x 12.7 mm MG armament allows this aircraft to hit hard at targets that sit still long enough for you to get a bead on them.

At the beginning of the 1930s, the American company Vultee was developing a concept for a strike aircraft capable of effectively hitting ground targets, light vehicles and enemy infantry from low altitudes. Effective actions by Germany’s Ju-87 dive bombers in Europe served as a basis for the creation of a concept for the American A-31 Vengeance, a strike dive bomber with a machine gun battery in its wings. This new addition immediately caught the attention of the British delegation, which happened to be searching for a design like the Stuka to aid in the fight against Germany. In the course of modernization, the A-31 received a new 1700 hp engine and strengthened armament of five, and then seven high-caliber Browning machine guns (six in the wings and one more for defense against attacks from the rear), and a bomb load of up to 2000 pounds. Modernized version got new designation - Vultee A-35. In spite of a large export order, the Vengeance also served in the American air force and navy, and the reviews about it were contradictory. For the war in Europe, the bomber turned out to be ill-prepared. Its low speed, large silhouette and need to descend to drop its bombs made it very vulnerable to enemy flak cannons and fighters. However, in the Pacific Theater the vehicle performed well. The Japanese had far fewer anti-aircraft defenses, and the Vengeance served as an attack aircraft, a bomber and a submarine hunter.