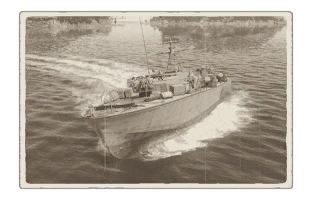 The 94 ft PT-811 is a gift rank IV American motor torpedo boat with a battle rating of 3.7 (AB/RB/SB). It was introduced during Update 1.95 "Northern Wind" in the Operation F.R.O.S.T. event as the first naval reward ship for acquiring 5 of the 12 available "Mark of Distinction"s.