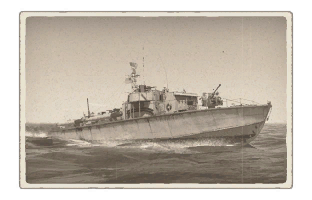 The PT-810 was one of four experimental boats built in [1951] with various armaments, but with an identical powertrain. She is a rather large patrol torpedo boat with a draft displacement of 90 tons. The craft was designed to be equipped with armaments of several types at once. The first, of course, was torpedoes: four torpedo tubes with Mk 16 torpedoes were located along the vessel’s sides. In the stern, the engineers placed two depth charge launchers. They also didn’t skimp on artillery armament: the experience of real-life battles had resulted in some significant corrections to the requirements for patrol boats. Two single Bofors 40 mm guns were placed in rotating turrets in the bow and stern of the boat. Two twin Oerlikon 20mm guns were mounted on the bridge and above the engine compartment. As if this wasn't enough, the boat was also equipped with an 81 mm Mk 2 Mod 0 mortar with the ability to fire shells not only in a high arc, but also with direct aim.

The vessel was propelled by four engines, each putting out 1,200 hp. Thanks to the boat’s small mass, these engines gave her an excellent speed of 44 knots (over 80 km/h).