Difference between revisions of "58 ft PT-3" 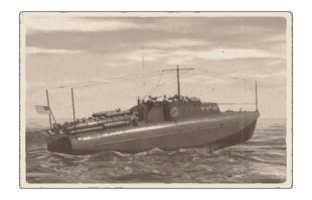 The 58 ft PT-3 has no external armour to protect it, and as such cannot sustain much fire before sinking. Its hull is 40 mm of wood, while the superstructure, also made of wood, is 15 mm thick. The most vulnerable sections of the ship are the bridge and the aft section housing the torpedo and depth charge racks as well as the main propulsion system. This is the area that is also the most likely to catch fire as well. When housed, the torpedo and depth charges can be detonated from sustained fire. The 12.7 mm AN-M2 machine guns cannot be knocked out separate to the ship itself. The small crew size of 12 means the PT-3 can take even less of a beating than the PT-6.

AP rounds are a good recommendation since they do similar amounts of damage to unarmoured targets as Universal belts. Additionally, using AP means you will have a better chance at penetrating the armour of low tier Russian boats and sub-chasers.

Sitting at 1.0 BR it will occasionally fight bigger boats capable of destroying it in a single shot, but fairs pretty well against the other reserve vessels it faces off against. Compared to the PT-6, it has similar armament, yet is slower, and has a lower crew count of 12, meaning that it cannot take as much punishment as the PT-6 before sinking. In fact, the only advantages this ship has over the PT-6 is its smaller profile and tighter turn radius, making it able to easily navigate restricted waters.