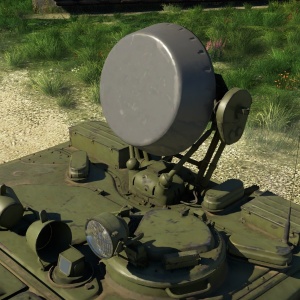 The 1RL33 or RPK-2 "Tobol" is a Soviet ground based target detection and tracking radar. In game it is found on the ZSU-23-4.

The 1RL33 is capable of both scanning for targets and locking onto targets, however it does not offer "Track While Scan" (TWS) capability, this means that the radar must cease scanning in order to lock onto a target. As a result of this if a target is locked onto then all other radar blips will stop updating and be removed from the display within a few seconds. Upon a target lock being lost the radar will revert to scanning. When the radar is locked onto a target it will stop sweeping and instead point directly towards the target, following it as the target moves.

The radar has a "Line of Sight (LoS) scan" mod. In this mode the radar dish is locked in place facing the front of the turret, as such it will only detect targets within a very narrow azimuth range, relative to the front of the turret, however elevation scanning angles remain unchanged. In LoS mode the radar (and thus the turret) need to be directly facing a target in order to detect it, once a target has been detected it can be locked onto in the normal manner and the radar will automatically follow it; once a lock is lost the radar will revert to LoS mode and face the front of the turret. The benefits of operating the radar in LoS mode are that as the radar is not emitting in all directions you will not alert enemy aircraft equipped with radar detectors to your presence unless you aim directly at them.

The default scanning mode of the 1RL33 is to scan a 60 degree arc. It is possible to switch the radar into scanning a full 360 degree, although due to the incredibly slow scanning speed this option is rarely desirable.

Compared to other search and tracking radars the 1RL33 has a decent range of 20 km for detection and 16 km for tracking. It is the only search radar primarily designed for scanning a small sector, instead of 360 degrees; as such it has an incredibly slow scanning speed. Being a combined search and tracking radar like the Marconi S 400 the 1RL33 lacks track while scan capability, however like the Marconi it can also track targets through a full 360 degrees.

The 1RL33, also known as the RPK-2 "Tobol" was a soviet radar developed in the 1950s for use on the ZSU-23-4 SPAA vehicle. The radar reportedly suffered from high levels of ground clutter (false returns on the radar display) under certain operating conditions, but offered good resilience against radar countermeasures.

The NATO reporting name for the radar system was "Gun Dish".