Difference between revisions of "1RL144" 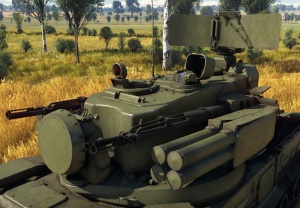 Compared to other search and tracking radars the 1RL144 has a decent range of 20 km for detection and 16 km for tracking. Being two separate radars it allows a target to be tracked, while still scanning for new targets. The tracking search radar has a good minimum relative speed of only 36 km/h. The tracking radar has slightly narrower azimuth tracking angle than the Gepard's radar (±90° instead of ±100°).

The 1RL144 (NATO reporting name "Hot Shot") was a Soviet radar system developed in the 1970s as part of the 1A27 radar complex, to serve as the fire control system for the Tunguska anti-aircraft system. As well as the search and tracking radars which made up the 1RL144, the 1A27 also featured a control computer and angle measurement system. Later models of the Tunguska featured a new radar complex with an "Identification Friend or Foe" (IFF) system, which allowed the radar to identify which radar returns were from friendly aircraft, and which were from enemy aircraft.