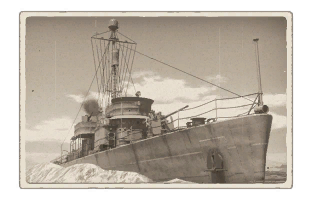 This ship can be armed with depth charges, once they are researched. These come pre-armed with a 3 second fuse, and once dropped in the water will explode after this time. You can adjust the fuse time in the menu in the Battle Lobby when you select the ship. Depth charges can come in quite handy if you have a boat or ship close on your aft and you can't turn around to shoot them. This type of situation comes up mainly at Capture Points when there are multiple enemy ships or boats trying to capture the point and destroy you. Just get pointed straight and drop 2-3 of them behind you. (Left-Cntl by default). Even if the boat or ship is fast, the charge will either break their hull or cause significant damage to the vessel, allowing you to get away or turn around.

The ship had a displacement of 280 t, a length of 173 ft 8 in, a beam of 23 ft, and a draft of 10 ft 10 in. It was powered by two 1,440 bhp Fairbanks Morse 38D8 1/8 diesel engines, and featured a Westinhouse single reduction gear, and had two shafts. The armament consisted of one 3"/50 dual purpose gun mount, one 40mm gun mount, three 20 mm guns, two rocket launchers, four depth charge projectors, and two depth charge racks. The crew complement was 65 sailors and officers, and the maximum speed was 20.2 knots.