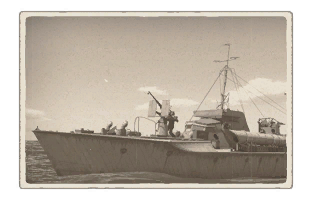 Vosper 2 series internals (starboard side). Note the ammo storages below the bridge.

Any gun in the game will easily be able to penetrate anywhere on the boat, including the gunshield, at practically any range.

Vosper 2 series can be hull-broken by any gun that is greater than or equal to 4 inches (102 mm) in diameter. Hull-break triggers when a capable gun destroys any hull compartment or the bridge, resulting in instant destruction of the rest of the boat. At Vosper 2 series' battle rating, these include the 8cwt QF Mk I (found on Dark class (FPB 1101)), the 4 in QF Mark V (found on Isles class (T-285)), and the BL Mark IX (found on Flower class (K-218)). While it isn't uncommon for a boat in tier 1 and 2 to be able to be hull-broken by guns larger than 4 inches, it's relatively rare for it to be able to be hull-broken by actual 4-inch guns. This trait is generally given only to reserve boats or boats very early in the tech tree, including Vosper 2 series.

Of note are the ammo storages located just underneath the bridge. Destroying these will also destroy the rest of the boat. In practice, though, this almost never happens, since most guns at this battle rating are either machine guns or low-calibre autocannons which require many hits to destroy ammo storages. It's often both quicker and easier to target the hull compartments and knock out the crew.

When moving forwards at high speeds, the bow will slightly lift out of the water, and the hull will drift very slightly to starboard without any player input, though both are unnoticeable in gameplay and don't affect the firing of the guns in any real way. Vosper 2 series has a displacement of 38 tons.

In her main armament group, Vosper 2 series has one 20 mm Oerlikon Mk.II in a single mount, mounted centerline in front of the bridge. It has 1,980 rounds of ammunition available. The mount can traverse horizontally at a rate of 75°/s and vertically at a rate of 75°/s. The gun has a belt capacity of 60 rounds and has a rate of fire of 450 rounds/min. With a stock crew, it can be reloaded in 5.2 seconds; with an aced crew, it can be reloaded in 4 seconds. Its maximum range against surface targets is roughly 2.1 km.

In her secondary armament group, Vosper 2 series has two 12.7 mm Vickers Mk.V guns in a twin mount, mounted centerline behind the bridge. It has 5,200 rounds of ammunition available, 2,600 rounds per gun. The mount can traverse horizontally at a rate of 75°/s and vertically at a rate of 75°/s. Each gun has a belt capacity of 200 rounds, and they both have a stated rate of fire of 600 rounds/min, though, in actuality, the gun on the gunner's right side fires faster, at around 685 rounds/min, firing all 200 of its rounds in the time it takes the left side gun to fire about 175 rounds. With a stock crew, the guns can be reloaded in 10 seconds; with an aced crew, they can be reloaded in 5 seconds. Their maximum range against surface targets is roughly 2 km.

Vosper 2 series has two torpedo tubes, one on each side of the bridge, and can carry two 533 mm Mk.VIII torpedoes. The torpedo tubes are pointed forwards, but they are angled outwards on each side and are fixed, requiring the boat to be turned in order to aim them. Mk.VII depth charges numbered 1-4 according to the order in which they're dropped (click to expand).

Vosper 2 series can carry four Mk.VII depth charges just behind the bridge, two on each side facing outwards. The depth charges are dropped one at a time and drop in this order (see the image):

Vosper 2 series is the first boat in the British naval tech tree to be fitted with the 20 mm Oerlikon Mk.II cannon. The Oerlikon Mk.II is a very common gun found all throughout the US and British naval tech trees, and it's a fantastic one at that. With both a very good damage output and a maximum range of about 2.1 km, the Oerlikon Mk.II is a nice change in pace compared to the armament of previous boats. Although they may not be as hard-hitting as the 2 cm/65 C/38 (20 mm), another very common 20 mm gun, the Oerlikon Mk.II has a much larger belt size of 60 rounds, compared to the 40 rounds of the 2 cm/65 C/38. Even with a large capacity belt, it's still good practice to fire off any remaining ammunition after engagements to have the belt be at full capacity for the next engagement. With 1,980 rounds of ammunition, running out of ammunition shouldn't ever really be a concern.

As for her secondaries, Vosper 2 series has a twin 12.7 mm Vickers Mk.V mount. Though lacking the punch of the Oerlikon Mk.II individually, the Vickers Mk.V guns have a better rate of fire, and, together, the two guns have roughly the same damage output as the single 20 mm. Still, the single Oerlikon Mk.II is the better weapon for two reasons: 1) the HE rounds have HE filler, which means that they start fires much more often, even compared to the Vickers Mk.V's incendiary rounds; 2) it can fire directly forwards. This second point is particularly important because it means that it can be fired without exposing the rear and sides of the boat, which greatly increases survivability.

Aim to always keep the bow pointed directly towards the enemy, exposing as little of the sides as possible. This does mean that the rear gun mount won't be able to fire at all, but since it's controlled by the AI gunners, it generally isn't worth sacrificing survivability over. In most cases, it's better to just set the secondaries to target aircraft only and forget about them, relying only on the Oerlikon Mk.II and manually switching to the secondaries only if the 20 mm cannon is knocked out or is reloading.

Both the Oerlikon Mk.II mount and Vickers Mk.V mount have very good firing arcs. The single Oerlikon Mk.II mount can fire roughly 157° to either side, centered directly forwards, and the twin Vickers Mk.V mount can fire roughly 157° to either side, this time centered directly rearwards. Though both guns have a maximum range of approximately 2 km, firing at targets further than 1.75 km or so is not recommended in most cases, since it will only serves to waste ammunition and can give away your own position.

For the 20 mm Oerlikon Mk.II, the best ammunition choice is the 20 mm HE because it has the highest ratio of HE rounds to AP rounds, meaning that it will be the most effective against both aircraft and surface targets. The 20 mm HE belt should be the main ammunition choice, but a few of the 20 mm AP belt should also be taken into battle for use against armoured targets. The AP belt is also useful against enemies heading directly bow-in. In this situation, HE rounds will only damage the bow compartment and, if that compartment is already destroyed, will deal only minimal damage. AP rounds can pass through the bow compartment and deal damage to the rest of the vessel.

For the 12.7 mm Vickers Mk.V, the 12.7 mm I belt is slightly better against both aircraft and surface targets compared to the 12.7 mm API belt. Though the AP rounds penetrate 5 mm more armour at point-blank than the I rounds, with such a small difference, the AP rounds won't be able to penetrate any armour that the I rounds can't. That said, the damage output difference between the I and API belt is so little that it's largely down to preference which to use.

The Mk.VIII torpedoes are a decent torpedo with above-average top speeds and warhead size. Its maximum range is more of less average compared to other torpedoes at this tier.

Be aware though that, if the torpedo is unused, it can be shot at, and, if it's destroyed, there is a chance the entire boat can be destroyed along with it. For this reason, it's best to either use them early on or to not take them into battle at all.

There is no practical reason to take them into battle, especially since, if they're not dropped, they essentially become unarmoured ammo racks.

During the 1930s, the Admiralty tried to reestablish the coastal boat flotillas it once possessed during the first World War. British boatbuilding company Vosper & Company vied for the contract but lost both times in 1935 and 1936, the contract to build the first coastal boats since WWI going instead to the British Power Boat Company. Vospers continued in their effort to receive a contract from the Admiralty for their boats but to no avail. At the time, though, the Admiralty had unofficially suggested that future contracts would only be awarded for boats that were able to reach 40 knots and that were armed with two 21-inch torpedoes as well as light anti-aircraft guns. With these specifications, Vospers took the risk and preemptively began development on a new motor torpedo boat.

In 1937, Vospers completed their prototype. It was 69.5 feet long and had a hard chine hull design, like many boats at the time, which produced hydrodynamic lift at high speeds, lifting the hull out of the water to reduce drag. It was powered by three petrol engines from Italian manufacturer Isotta Fraschini, each driving a single shaft, together producing 3,600 bhp. The prototype displaced 33 tons, and, in internal trials, it reached 43.7 knots loaded and 47.8 knots unloaded. For its torpedo armament, many different arrangements were tried, but it was eventually decided that they should be mounted on either side of the bridge, pointed forwards and angled outwards. This torpedo placement was uncommon at the time but would become the standard placement on Allied motor torpedo boats during WWII. For its gun armament, Vospers experimented with various combinations of 0.303 calibre machine guns, 0.50 calibre machine guns, and a 20 mm autocannon. The prototype went on trials for the Admiralty in 1938, after which it was purchased and designated MTB 102. In 1939, MTB 102 went on trials against a competing design by British Power Boat Co. Vospers won, and, subsequently, its design was selected to be the newest line of Coastal Forces motor torpedo boats.

The boats built following MTB 102 all shared its design, although the hull was lengthened to 70 feet. In 1940, with the entrance of Italy into WWII, engines from Isotta Fraschini could no longer be obtained and subsequent boats had to be fitted with much weaker petrol engines (1,800 bhp total) from American manufacturer Hall Scott as a stopgap measure until they could be upgraded with more powerful petrol engines from Packard, though this wasn't until 1941. In total, 28 of the 32 planned 70 ft Vosper MTBs were completed: