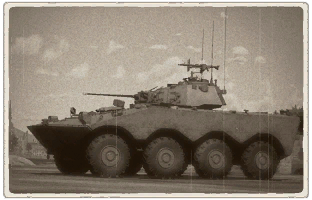 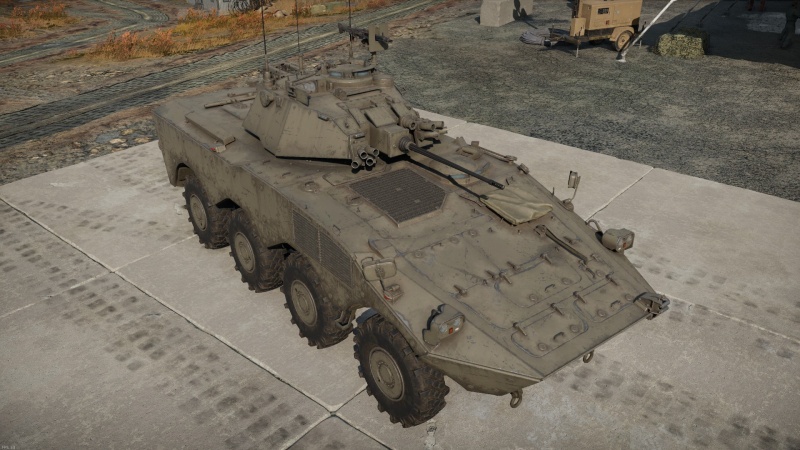 The Veicolo Blindato da Combattimento, Prototipo 2, «combat» is a rank VI Italian light tank with a battle rating of 8.7 (AB/RB/SB). It was introduced in Update "Danger Zone".

The VBC (PT2) has enough armour to protect it against heavy machine gun fire and low level autocannon fire. Due to this, it is quite well suited to facing other lightly armoured vehicles and will be able to take a beating as long as it's not hit in any important modules. However, the machine will not be able to withstand high-calibre rounds such as APFSDS or HEAT shot by MBTs. It is advised that you keep in mind what type of damage an enemy can do to you when facing each other, make the most out of your armour when possible but don't completely rely on it for every engagement.

The VBC is equipped with a powerful 520 hp engine that is capable of taking this vehicle to a top speed of 110 km/h. Should it need to back out, it has a 40 km/h reverse gear available, which is very effective if it is an emergency. Thanks to its six steerable wheels, it can change direction quickly, accurately and effectively without bothering the aiming. The wheels and excellent suspension ensure that the VBC can operate smoothly on all surfaces. 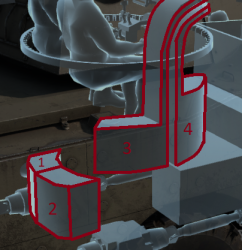 Ammo racks of the VBC (PT2)

The VBC PT2 incorporates the playstyle of the Centauros and the Dardo IFVs, so it's best to play this vehicle as a support to your more armoured allies. The VBC is wheeled meaning that whenever it finds a road it's able to go at much higher speeds compared to many other vehicles at the battle rating. It is best to stick with allies when possible if you are planning to fight enemies head-on. The VBC at times can be used effectively in urban combat. If you pick a side street to set up, when the enemy goes past hopefully without seeing you, you will be able to hit them in the side with your main 25 mm cannon. By doing this you can become quite the annoyance to the enemy team as there's not much they can do to stop you. If you've been spotted however you will need to move as quickly as possible. The VBC, although being fast, is not very survivable. Its armour is only good against machine gun fire and low level autocannon fire. An enemy MBT will make short work of you. One of the many weaknesses of the VBC is the fact that it also has a big profile which usually means hiding is not possible at times.

When playing stock as the VBC PT2, it might be hard to earn points, you can still however be useful by actively scouting enemy players and attacking enemy aircraft, which the 25 mm cannon is more than able to do. The VBC can also work well late game when capturing points is essential to getting the victory, make the most out of its mobility. Once you research the important modifications for this vehicle (APFSDS and Thermals), your offensive capabilities are greatly improved. The VBC has a 25 mm Oerlikon-Buhrle cannon, which is able to use APDS and APFSDS. The stock round for the 25 mm cannon is not too good at dealing with enemies but once the APFSDS round is unlocked, the VBC PT2 can easily make short work of MBTs and light vehicles frontally or from the sides. Sadly, unlike the VCC-80 'Dardo', the VBC doesn't have ATGMs so keep that in mind if more armoured foes present themselves. Other neat additions that will greatly aid you is the VBC's thermal imaging device made by Kollsman. Although only available for the gunner, it is a great asset that you'll be able to use once unlocked to easily pick out and spot enemies. In terms of defence systems, it has access to smoke dischargers, which at times can prove to be very useful. Another system the VBC PT2 has is a laser warning receiver which will alert you when an enemy vehicle is lasing you, such as when laser rangefinding or guiding laser-guided missiles.

The history of the OTO Melara/Iveco VBC begins during the late stages of the Cold War. In 1995, shortly after the development of the B1 Centauro tank destroyer made by OTO Melara and Iveco, Italy would begin to show interest in what they could do to the design of the Centauro to allow it to be used for different roles and scenarios. This was partially due to Italy finally being somewhat independent in its military industrial complex, which allowed more homegrown designs to be put into service. Whilst the Cold War had been raging on, Italy had begun to rapidly re-arm itself mainly due to the post WW2 laws no longer being in effect, and Italian companies such as OTO Melara became able to continue work on military projects.

As the B1 Centauro was being produced, the Ministry of Defense would green-light a set of programs that would aim to modify and equip the Centauro with many different weapon systems to fit different roles which would make it more versatile. One of them would be named "VBC", standing for "Veicolo Blindato da Combatimento" (armoured vehicle for combat in English). The first vehicles which came out of the VBC program would firstly only have slightly modified B1 Centauro hulls, one would go on to mount the OTO TC 20 turret, it was armed with an automatic 20 mm Rheinmetall Rh202 cannon, at the time the turret was installed on the Fiat 6616. Another variant would install what was known at the time as the OTO TC 25 Hitfist turret, this was armed with an Oerlikon KBA 25 mm automatic cannon. This turret was already installed on the VCC-80 'Dardo' infantry fighting vehicles. These vehicles would be shown extensively during military vehicle expos but ultimately did not generate any interest so a different design would be made in hopes for it to be picked up. The next vehicle which was also known as the VBC under that program would instead have a heavily modified hull, the main changes would be the introduction of a proper space for infantry to be carried at the back of the vehicle and the new weapon system known as the OTO 60 mm HVMS. This sadly would not be picked up and development would begin to slow down.

Fast forward to the early/mid 2000s, and OTO Melara alongside Iveco would showcase a new prototype of IFV which would also be known as the VBC. This would be the second prototype which would use a lot of the technical know-how gained during the early stages of the program. The main differences would be an entirely new hull, and it only shared a few things to the hull it was based off. The crew compartment would be remade to allow for more room, the protection of the vehicle also increased. In terms of speed, it got a new engine and was able to go over speeds of 105 km/h on roads. Off-road it still held its own but naturally being wheeled meant that it had a harder time compared to its tracked counterparts. The vehicle would be much taller and wider than a standard B1 Centauro, it would fitted with the latest technology but for testing purposes, OTO Melara opted to arm the prototype with the OTO TC 25 Hitfist turret which was still used by the VCC-80 'Dardo'. The turret was the exact same for the most part, for example the ability to mount TOW ATGMs was kept and also used during testing, the only difference from the standard Dardo turret was the additional 7.62 mm machine gun attachment on top of the turret roof. This vehicle would eventually be better known as the "Freccia IFV" prototype. After rigorous testing OTO Melara decided to finally remove the Dardo turret and substitute it with a more modern turret which was able to fire Israeli-made Spike ATGMs. Eventually the Italian army would decide to make an order for the vehicle and by 2009 the Freccia IFV was in full time service.

Following the procurement of the Centauro into service by the Italian armed forces, the designer consortium, made up of the IVECO and OTO Melara companies, continued work on the design in an effort to create further, complementing variants. One such variant would be conceived as an IFV, equipped with a further developed turret used on the tracked Dardo IFV, which would later become the Hitfist turret.

Based on a modified Centauro chassis and fitted with the new turret designed by OTO Melara, the first prototype of the new IFV design was constructed and handed over for testing to the Italian army in 1996. As the testing was deemed successful, the Italian army placed an initial order calling for 249 units of various modifications to be manufactured in 2006, thus officially adopting the design into service. Simultaneously, the new vehicle received the official designation 'Freccia' (eng. Arrow) in Italian service.

The Freccia represents the spearhead of the Italian light armored units and is among the most advanced vehicles in service with the Italian forces. Outside of the military exercises, the Freccia has not taken part in any active combat operations and Italy remains its sole operator until the present day.