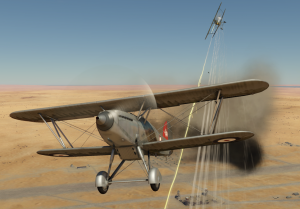 The Imperial Japanese Army Air Service had the Type 89 as a designation for two aircraft machine guns, a fixed model (detailed here) and a flexible mount (Type 89 'special' (7.7 mm)) that were two very different guns with different origins. The fixed Type 89 is a Japanese copy of the Vickers Class E which was an airborne version of a World War I-era machine gun converted to be air-cooled. It was positioned in the wings of fighters or in engine cowlings where it was synchronized with the propeller. Preserved examples of the fixed Type 89 show that it was used in ground vehicles along with aircraft, notably the Type 97 Te-Ke tankette. The machine gun was also used on the Ki-27 "Nate", Ki-43 Hayabusa, and Ki-44-I Shoki fighters along with the Mitsubishi Ki-30 "Ann" light bomber, Ki-51 "Sonia" dive bomber, and the Ki-32 "Mary" light bomber. After World War II, some Type 89 fixed guns saw use by Communist forces during the Korean War.