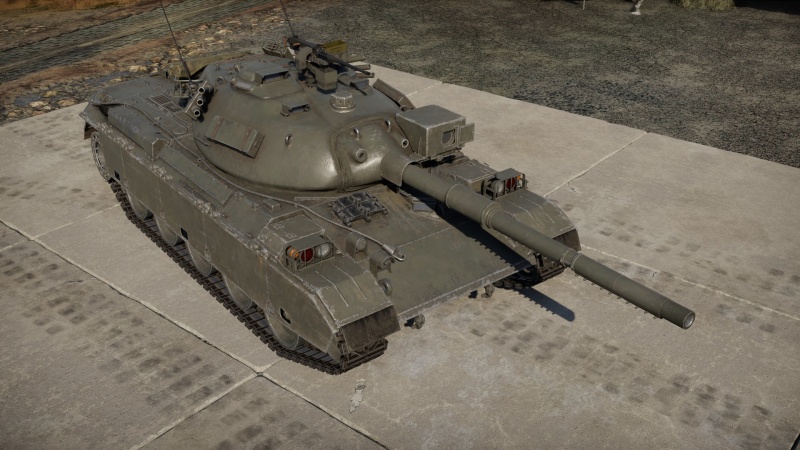 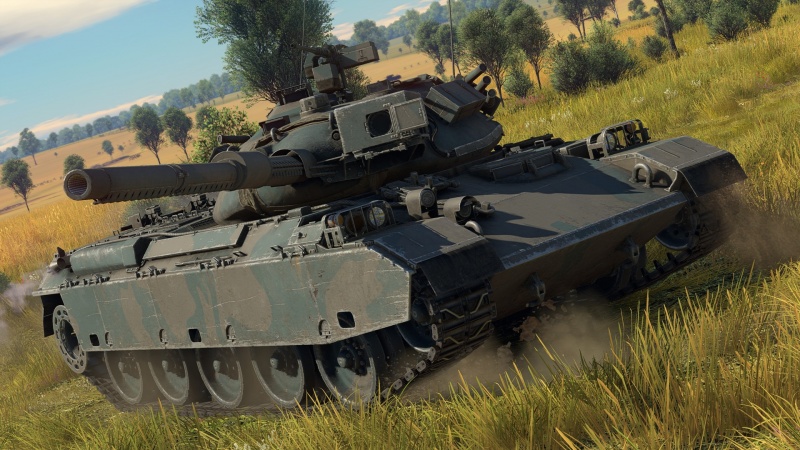 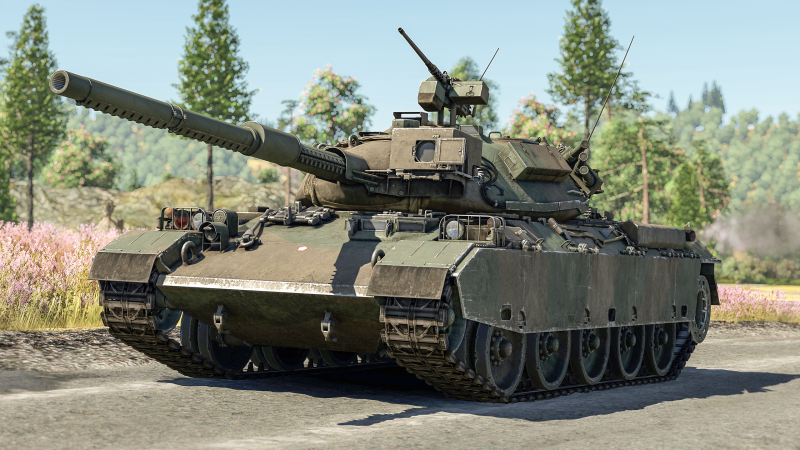 The Type 74 mod G/Kai is a premium gift rank VI Japanese medium tank with a battle rating of 9.0 (AB/RB/SB). It was introduced in Update 1.87 "Locked On". Compared to its tech tree counterparts, the Type 74 (E) and (F), it has the IR floodlight replaced by a thermal imaging system and a minuscule upgrade to its protection in the addition of sideskirts.

The armour on the Type 74 is nothing special and shouldn't be relied upon to survive a shot from the enemy. It is therefore better to not get hit by an enemy tank shell to begin with. Its only merit is being able to resist autocannon rounds from light tanks or IFVs, which can buy precious seconds for the Type 74 (G) to retaliate before the enemy gets a good shot.

With four crew members, the survivability of the Type 74 (G) after penetration is on-par with other tank designs from USA and Germany. The prominence of APFSDS shells at this rank combined with the thin armour of the Type 74 (G) can mean instances where an APFSDS penetrates the armour and goes right through with minimal shrapnel damage, and so relatively little interior damage outside of the APFSDS' direct flight path.

The special thing about this tank is its pneumatic suspension. It give you the possibility to be fully hull-down on mountains. That capacity can make the Type 74 (G) less visible and therefore less exposed to enemy fire.

The Type 74 (G)'s mobility is pretty decent and comparable to the OF-40 Mk.2A or Leopard A1A1, but slightly slower. The Type 74 (G) however has a reverse speed of only -14 km/h against -25 km/h for the previously mentioned tanks.

While the Type 74 (G) can outspeed Soviet, British, and most American medium tanks, don't expect to be faster than a BMP, TAM, Bradley, or the faster premiums like OF-40 (MTCA) or AMX-30 Super.

The gun is identical to the tech tree versions of the Type 74, a 105 mm L7A3 cannon. It possesses one of the more potent kinetic shells of the rank with its Type 93 APFSDS. Although the reload time is not as fast as other 105 mm armed tanks that can be encountered, like the Leopard A1A1, OF-40, and the AMX-30 Super, the Type 93 APFSDS has even greater penetration power than the L44 cannon on the Leopard A1A1 (L/44).

The gun comes with a stabilizer so firing on the move with the Type 74 (G) is possible. The gun depression of 6 degrees is, on paper, relatively poor that doesn't allow for effective fighting from ridgelines, requiring a position that exposes the tank more to get a shot at your target. However, the pneumatic suspension can compensate for the lack of gun depression, and so it must be utilised to get the most out of the Type 74 (G). 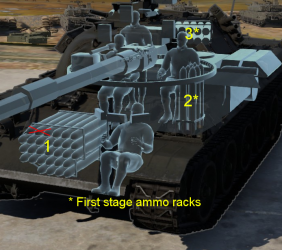 Do not charge them with just the MG, especially at long range, as even poorly armoured rank V light tanks can survive frontal MG fire long enough to disarm and explode the Type 74 - let them come to you, hit them with the main gun and ensure they never move again by firing at their sides or flat parts, while hiding yours.

The Type 74 (G) is a classic MBT with good mobility and firepower. It's fast enough to be somewhat competitive with its peers (although low-speed acceleration and manoeuvrability are lacking, which makes urban fighting sometimes tedious), and can sometimes reach favourable early-game positions before the enemy. The Type 74 (G) is slower than the AMX-30 Super, OF-40 (MTCA), and most IFVs, so watch out for those tanks in situations where mobility is required. The Type 74 (G)'s reverse speed is mediocre, so peeking an enemy in order to take a shot can be dangerous; the enemy may have time to fire back before the Type 74 (G) can retreat into cover. All in all, this tank has good mobility, but it can't be depended on in a pinch, and it certainly doesn't give the Type 74 (G) a significant advantage over the enemy.

The armour on the Type 74 is nothing special and shouldn't be relied on to survive a shot from the enemy. Any APFSDS shell can penetrate the Type 74 (G)'s armour from practically any angle. It is therefore better to not get hit by an enemy tank shell to begin with. The armour's only merit is being able to resist machine gun and autocannon rounds from light tanks or IFVs such as the BMP-2, which can buy precious seconds for the Type 74 (G) to retaliate before the enemy gets a good shot. With four crew members, the survivability of the Type 74 (G) after penetration is on-par with other tank designs from the USA and Germany. The prominence of APFSDS shells in this rank combined with the thin armour of the Type 74 (G) can mean instances where an APFSDS shell penetrates the armour and goes right through with minimal shrapnel damage, and so relatively little interior damage outside of the APFSDS' direct flight path.

With the Type 74 (G), it is recommended to take no more than 15 shells into battle, since these first 15 shells are stored in a relatively safe compartment in the turret. With these shells, the tank is able to penetrate most enemy tanks except at very long ranges. The Type 93 APFSDS shell is one of the best at this tier, and a quick reload time lets the Type 74 (G) be a deadly weapon on the battlefield. The Type 74 (G) has a worse rotation than most Western MBTs, although it is better that that of Soviet tanks. This difference can mean the difference between life and death in situations where quick aiming is important. This tank is also able to use a pneumatic suspension system to lower or raise its hull on its suspension. This is useful when firing from behind cover. The Type 74 (G) can go fully hull-down when behind a ridgeline, and ridgeline sniping is therefore one of this vehicle's strengths. While it's not recommended, it is possible to use the tank's 12.7 mm machine gun to fight light tanks like the AUBL/74 HVG.