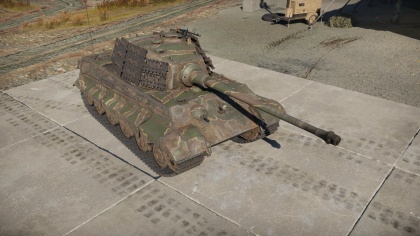 The Pz.Kpfw. VI Ausf. B (H) mit Simmering Sla.16 is a premium rank IV German heavy tank with a battle rating of 6.7 (AB/RB/SB). It was introduced in Update 1.57 "Battle March". As a purchasable bundle vehicle, this variant comes with premium bonuses and the experimental installation of a diesel power engine, increasing its mobility vastly. But the vehicle functions near identically to the in-tree regular variant. It fits into the 6.7 line-up very well and can be utilised greatly in battle because of it's enhanced combat capabilities.

The frontal armour of the Tiger II is very strong and can only be penetrated by a select few tanks at its battle rating and even less when fighting in a down-tier. The side and back armour, however, are pitiful with only 100 mm at its thickest, some SPAA at the rank can penetrate the sides so it is advised to never show your back or sides to an enemy lest you want to go back to the hanger/garage. It is slightly more armored then its non-premium counterpart with added tracks on the sides on the turret, adding an extra 30mm of armor to the very weak sides.

The main gun this Panzer beholds is the KwK/43 88mm long-barreled gun. This gun performs astoundingly well for this BR, offering high muzzle velocity with more than enough post-penetration damage. The muzzle velocity of this gun sits at around 1000m/s for APCBC and 1400m/s for the APCR round, and also has HEAT shells, making it an exceptional sniper and brawler alike. The APCBC stock shell gets a fair amount of explosive filler with a wide one-shot capability upon penetration. This shell exceeds in ammo-racking enemy tanks, so aim for ammo stowage on the enemy vehicle. The APCR should only really be used for engagements on enemies you cannot punch through with APCBC alone, since it offers significantly higher penetration at the expense of post-pen damage, making it a very situational round. The same can be applied to the HEAT shell for long-range, as penetration dropoff does not matter on angled armour layouts, but instead offers poorer penetration values. 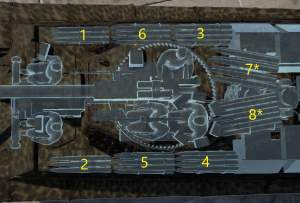 Ammo racks of the Tiger II (H). Note that racks 7 and 8 are ready racks.

Thanks to the ready rack feature found on this tank, the first and second ammo racks found in the back of the turret will always be full of ammo, making it the prime target for enemy tankers who are looking to detonate your ammo rack. Even solid shots like APCR and APDS that commonly pierce your front turret can make their way to the rear of the turret, potentially hitting the ready racks and can cause a critical hit to become a deadly one.

This tank, unlike the standard version, receives an additional top mount MG34 7.62mm machine gun located atop the commander's cupola with a wide arc of fire, designed for anti-aircraft purposes. However, this extra gun proves inadequate at efficiently dealing damage to aircraft and so should be used more prominently as a spotting tool or a light armour remedy.

Considering most of the players who use this vehicle will be using it in RB/SB, this section will cater to them. This vehicle can be used as a brawler and a sniper equally. With its potent gun and reliable armour layout, this tank can take a fair few shots before expiring. Try not to let your flanks become exposed if playing in urban maps. On open maps, you should stick to towns or hills and remain hull down to utilize your thick turret cheeks well. Aim for noticeable weak spots on enemies, ie. lower glacis shots or ammo rack shots will more often than not result in a reliable way to destroy them. The gun has a solid rate of fire, not too slow, so you can follow up with a return shot fairly quickly.

You will adapt over time and learn where the weak spots of most opposing vehicles. At times, this tank will act more as a support tank when considering the typical opponents will more than likely have stabilizers and sufficient suspension dampening, putting you at a disadvantage if you can't train your gun onto the target first. American heavy tanks such as the T29, T34, T32 and M103 will sometimes give you trouble. The trick to dealing with these tough, heavily armoured foes is to aim for the lower glacis. When engaging these vehicles, if you are not confident in being able to penetrate on your first shot, try and shoot the gun barrel to prevent your foes from firing back at you. 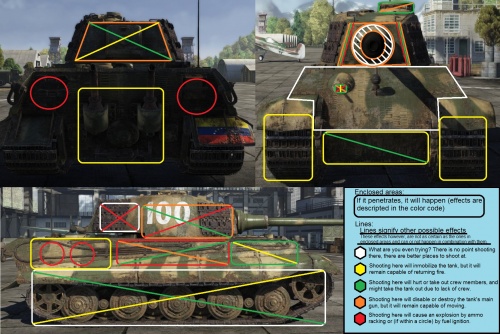 The first thing you want to do is deny the Tiger II of the advantage of its gun by getting as close as possible while keeping clear of its cannon (the closer you get, the better the penetration values for you and the Tiger II) most Tiger II operators will avoid getting flanked at all costs so you might find yourself forced to face one from the front. The biggest weak spot is the lower frontal hull plate, its slopped but only 100mm thick and behind it lies the transmission that likes to catch fires and create nasty shrapnel when destroyed, the shrapnel will fly inwards and if your shell is large enough they will take out the entire crew. However, this shot will most likely only leave the Tiger II unable to move for a minute and make his operator quite angry (at you) while his gun remains perfectly operational and before you have a chance reload you will most likely receive a very accurate shot from an irritated Tiger II operator.