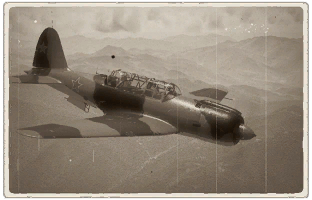 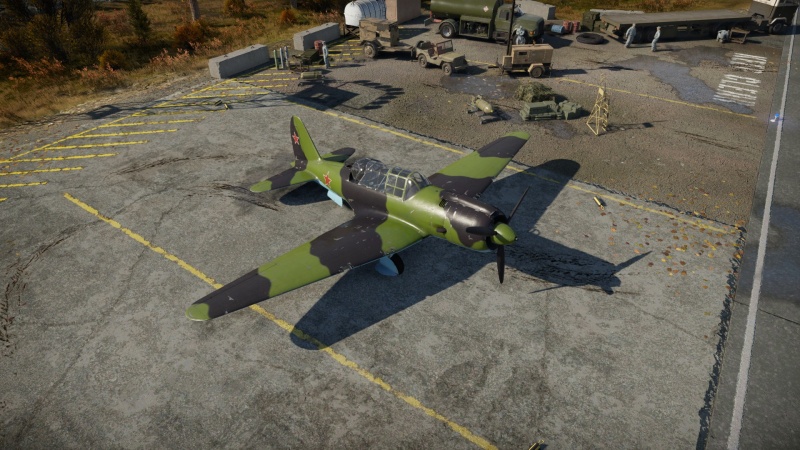 The Su-2 (M-82) is similar to other single-engined strike aircraft and bombers of the battle rating in terms of climb rate and top speed. But the long wings and incredibly powerful M-82 engine gives it one of the best manoeuvring energy retentions at the battle rating, which combined with really good acceleration makes it feel worlds more nimble than other similar aircraft.

The Su-2 (M-82) can be outfitted with the following ordnance:

This plane has decent armour that can stop anything with less power than a 7.62 amour-piercing round. The powerful offensive armament pours bullets at targets and is great at taking down planes and destroying SPAAs in mixed battles. This plane doesn't need air superiority to be effective however it is suggested as you can take more time in destroying ground targets using equipped ordnance.

Development of the Su-2 continued after the start of World War II. Special attention was given to improving the aircraft's combat characteristics. The production model had its electric trigger control upgraded, four ShKAS machine guns were once again mounted in the wings, and the LU (MV-2) lower turret, with a 7.62 mm ShKAS machine gun and a 500-round magazine capacity, was restored. The MV-5m turret (modified, with a larger continuous belt) was used as an dorsal defensive weapon. The magazine capacity was increased to 1,000 rounds.

Clusters of KMB-Su-2 bomblets were introduced for this series, allowing the bomber to prepare more quickly and easily for departure and allowing bomb bay space to be used more efficiently.

Eight unguided RS-82 or RS-132 rockets could be suspended under the Su-2, four on guide rails under each wing, even if bombs were also carried. At maximum load, the aircraft could take off with up to 8 FAB-100 bombs in the bomb bay and 2 FAB-250 bombs under the wings. Protective armour for the crew was also increased, especially for the navigator.

So that the flight characteristics of the aircraft would not suffer, the final production model Su-2 used a Shvetsov M-82 fourteen-cylinder double-row radial air-cooled engine with a maximum take-off power of 1,700 hp.

From the start of the war, the Su-2 was used on the front lines as a day bomber, a ground-attack aircraft, and a scout plane. Military units armed with the Su-2 fought in the Battle of Stalingrad in the autumn of 1942 and for the Kuban region in the spring of 1943.

Virtually all pilots who flew the Su-2 spoke of it very fondly. According to them, it was an undemanding, reliable warrior of the skies. Many times the planes returned with bullet holes or even parts of fins or rudders missing, but the maintenance personnel were able to repair them and send them into battle again a few days later.

Of those pilots who flew the Su-2 aircraft during World War II, 27 were awarded the title of Hero of the Soviet Union. Mikhail P. Odintsov and Grigory F. Sivkov were awarded it twice.

The Su-2 bomber was used relatively little for a number of reasons. The Ilyushin Il-2 ground-attack aircraft was coming into operation and became the most popular multi-purpose aircraft of the Air Forces of the Workers' and Peasants' Red Army. It replaced many functions of the Su-2 and was widely used in most military operations during the war.

Production of the Su-2 was discontinued in April 1942, and the plane had ceased to participate in combat units by the end of 1943. In all, 877 Su-2 aircraft were produced, including all variants.