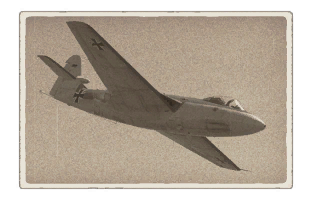 In 1956, the production of the five-year-old aircraft, the British Air Ministry cancelled the Hawker Sea Hawk production in favour of newer aircraft. At this time, the Federal Republic of Germany attempted to increase their naval aircraft inventory both looking for a daytime fighter-bomber and also an all-weather version. After comparing aircraft produced by other countries, the Bundesmarine concluded that the Hawker Sea Hawk fit their requirements and ordered a total of 64 aircraft, 34 of each variant, the Mk.100 and Mk.101.

The Mk.100 proved to be a capable multi-role aircraft, primarily outfitted for ground attack, it could also double as a fighter or bomber interceptor. With its excellent range, launching it from an aircraft carrier allowed it to extend its range without having to rely on ground bases. Options to carry bombs, rockets or a mix of both allowed the Mk.100 to attack both fixed and mobile targets. The aircraft sported four 20 mm autocannons all outfitted in the lower fuselage of the plane negating the need to factor in convergence when targeting aircraft or ground targets.

Though hindered by the straight wings and Rolls-Royce Nene engine, compared to other contemporary aircraft, especially the swept-wing MiGs, the Mk.100 can hold its own in air combat. Though attempting to dogfight with rockets and bombs suspended from the aircraft is unwise, going for the more streamlined approach of just adding two AIM-9B Sidewinder missiles will bring the Mk.100 into contender status. Care is a must when firing a Sidewinder as there is potential for it to latch its targeting system onto friendly aircraft or even the sun. The four autocannons can make short work of other fighters and even bombers when targeting critical components such as engines, cockpit and fuel tanks.

The Sea Hawk Mk.100 is an aircraft which is a mighty ground pounder, but also a capable air-to-air fighter. Though not as fast and sleek as other conventional fighters, in the hands of the right pilot, this aircraft can be critical to turning the tide in a match.

The Sea Hawk Mk 100 is a carrier-based fighter. Its powerplant is the Rolls-Royce Nene Mk.103 engine, which gives it quite decent thrust to weight ratio of 0.40 with full fuel tanks. The plane is not that fast, at sea level it can reach only up to 933 km/h and can struggle to keep up with some planes like the F9F-5 or the Yak-30 that can reach 1025 km/h at that altitude. If the plane carries missiles it gets even lower, decreasing to 909 km/h. The level acceleration is at most mediocre: getting past 850 km/h can be a challenge in most situations, and it will struggle when the enemy decides to just run away. The energy retention can be considered good, but planes like the F2H-2 or La-15 will easily outperform it in this aspect. The other downside to its overall performance is the subpar climb rate, with full fuel tanks it reaches 32 m/s at sea level. Flying at full power is limited to 15 minutes, after that time will start overheating. Reducing the power to 90-95% should cool it down.

The Sea Hawk does not have swept wings, so its high speed performance suffers a lot, but also makes it a very capable dogfighter at low and medium speed with its main strength being the instantaneous turn rate. However, the energy retention and poor acceleration makes it worse in any prolonged fight than a F2H, Yak-30 or MiG-15, after one or two full circles it will start struggling a lot. When it has some energy to spare the plane can pull even 13G, more than most of its competitors, making it a very dangerous enemy to any plane with swept wings, although it will significantly reduce its speed. The roll rate is quite good at low and medium speed, it can reach over 125°/s at 500 km/h IAS, but once the plane gains some more speed it decreases to 65°/s at 850 km/h IAS. The plane is equipped with two huge airbrakes in its wings that can help with reduce the speed after reaching the low structural limit value or during the landing. The flaps have very high limits, both positions can be used during the combat to further increase its instantaneous turn rate.

In simulator battles after stalling it out above 500 km/h IAS the plane will immediately start spinning, pulling the stick all the way to yourself is not recommended. After reaching 550 km/h it will need some negative pitch trimming to make it stay in level flight. Overall the plane is a very stable platform, aiming is very easy and it is pleasant to fly.

The Sea Hawk Mk.100 can be outfitted with the following ordnance:

In ground battles, this naval jet aircraft truly shines thanks to the high number of rockets it can carry, plus bombs.

In air battles, this naval jet aircraft is still very deadly thanks to its speed, manoeuvrability and access to the Sidewinder air-to-air missiles, but don't get too confident since other nations have some fighters which get early air spawn and some of them have more powerful engine than the Sea Hawk, so if you want to survive, you need to be aware of your surroundings.

Be careful when using Sidewinder air-to-air missiles as they can also lock on to unintended targets such as the sun or your own teammates.

The best use of the Sidewinders is to force faster jets into manoeuvres so you may catch up to them. Though this may waste a missile, it gives the Sea Hawk the ability to punch far above its weight class. In 9.0 games, the Sea Hawk is relegated to support duty as it is horribly outclassed in speed.

In a down tier, maintain energy dominance over lower battle rating enemies and don't over-commit; any jet can dodge your missile.

If you are using the missiles for a hunter-killer role, wait for your enemy to be at a slower speed (500-600 km/h) before launching. This means that the missile will be incredibly fast relative to your target, and give a much smaller window for them to dodge it at closer ranges.

However, as Hawker's aircraft offered good range, the Navy ordered three prototypes to be built in May 1946 and subsequently put through evaluation. Testing and tweaking of the design continued throughout the late 1940s until the first production orders for the aircraft, dubbed Sea Hawk, were received in November 1949.

The first Sea Hawks entered service with the FAA in 1953, with the remaining over 500 machines entering service by the mid-1950s. The Sea Hawk's service life is primarily marked by their extensive use during the Suez Crisis in the late 1950s, where they successfully proved themselves.