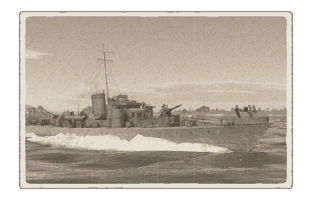 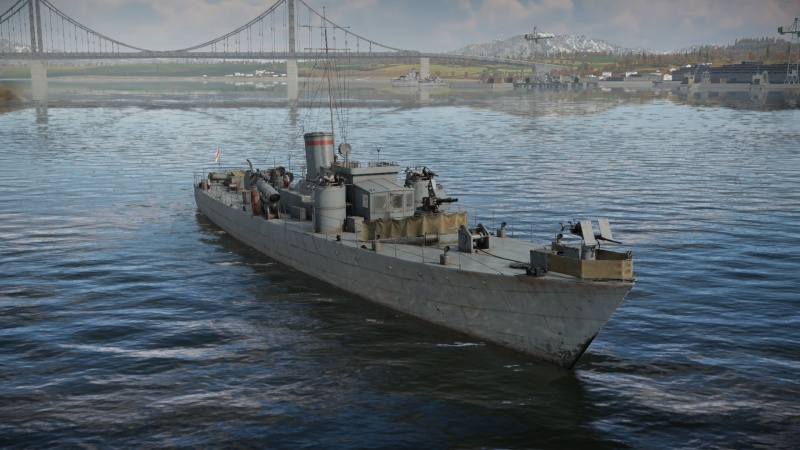 The Grey Goose has a 6 mm thick steel hull and 4 mm thick steel superstructure, with barely any armour whatsoever. It has 12.7 mm antifragmentation armour on the front guns and 8 mm antifragmentation armour on the 76 mm gun on the back, this combined with the profile of the guns result in the armaments only getting hit and disabled rarely. It also has 19 mm thick antifragmentation armour located on both sides of the boat near the center, where the engine is located. This makes the engine protected against most low calibre weapons on its tier, and it can usually be only penetrated by higher calibre AP rounds. This armour however does not extend far enough to protect any of the ammo storages on the ship, and if the front is under heavy fire, it will often result in the detonation of the quite large ammunition storage. The ship crew consists of only 34 people, making it the second most common cause of destruction.

The main guns are located on the front of the ship, a 2pdr QF Mk.IIc (40 mm) automatic cannon and a 20 mm/70 Oerlikon Mk.II (20 mm) autocannon. Both have 56 ammo in a clip, but the 20 mm fires considerably faster, usually emptying multiple seconds before the 40 mm. This can prove to be useful, as you can sustain fire with at least one of the guns at all times. They have 2240 and 1800 maximum total ammunition respectively, providing a generous pool for long engagements. The turrets can rotate almost all the way to the back, but the 20 mm blocks the 40 mm from firing directly to the front, so the ship needs to be angled slightly off target if both guns need to be fired on it. They are fit for close to medium range engagements, but quickly fall off at long ranges.

All three belts contain the same AP-T (Armour-piercing tracer shell) and HEF (High-explosive fragmentation shell) ammunition, only in different ratios. This makes all belts viable, the selection should be only based on speculation of opponents or preferred targets, and eliminate the need to switch belt type mid-battle.

The HE shell should be used against other ships, but it only has 6 mm of penetration, so it is only effective against lightly-armoured targets. The shrapnel round is effective against small boats, and thanks to its unique quality, it can also be used as a crude variable time fused AA cannon. Due to the relatively low muzzle velocity and low calibre compared to proper flak cannons, it will usually only deter enemy aircraft, with actual kills with it being rare. If both sea and air targets are set to be engaged, this turret will prefer air targets, often suppressing them through the course of the match.

Two turrets outfitted each with two 12.7 mm Vickers Mk.V machine guns can be found on both sides of the boat, and they have 8,000 total rounds. They can aim to the sides of the ship, and all the way up, and thanks to the high rate of fire, typically kills smaller close flying aircraft and smaller PT-boats, but becoming ineffective at medium-long ranges.

The ship is outfitted with 2 x Mk.VIII (533 mm) torpedo launcher tubes, pointing forward, but angled away considerably. This angle matches the usual engagement angle. The destructive power combined with high mobility can be deadly against larger craft, which would resist the smaller armaments on the ship otherwise.

The ship can be equipped with 4 x Type M Mark I mines, 2 on each side, in the back. They are dropped individually, starting with the 2 on the left and then on the right. They can destroy almost any vessel on the same battle rating, mostly if deployed along high traffic, narrow routes, or near capture points.

The Grey Goose is best played as a PT-boat hunter, but remains usable up to ships of the same size. The rapid-firing guns allow for quick adjustments, making it adaptable to quick range or speed changes of the target. The amount and type of armaments on the ship allow it to take up the position of an AA-ship for a while, if need be. It is best to avoid larger ships and long engagement ranges, as any hit from a larger calibre can destroy it, and the majority of the guns fall off at great distances.

The SGB series was designed due to the need of a hybrid of a motor gun boat and a motor torpedo boat by the Royal Navy. They were the only Coastal Forces ships to be made of steel. The Royal Navy originally wanted 52 of them, but only ordered 9. The series was marked SGB 1 to 9. 2 of them were destroyed during production, and only 6 of them survived the war. SGB9 was used as a trial vessel until 1956 by Vospers. The Grey Goose was sold in 1957, and is currently in Hoo St Werburgh, used as a houseboat.