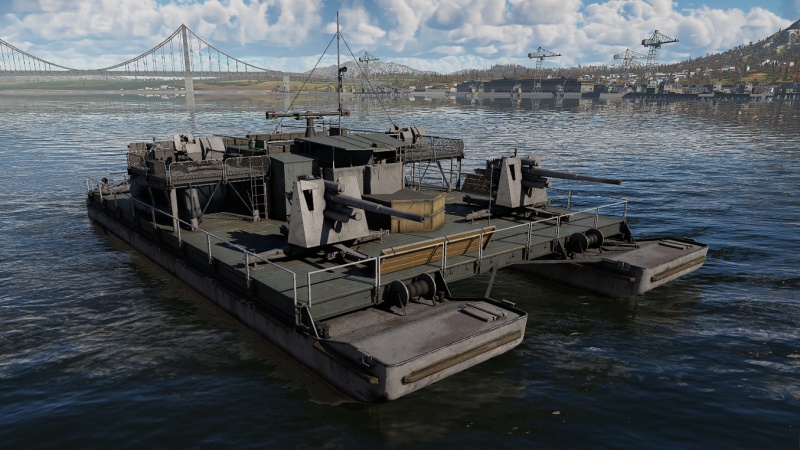 The SF40 Heavy's armour is basically the same as SF40 Leichte with changes around guns. It lacks armoured turret platforms, so guns taken out with HE shells might occur more often. Besides armour, the SF40 Heavy can be a tough opponent to sink since most HE shots will hit the deck with no damage to the hull. Also, the rather high crew complement of 47 (5 more than Leichte) makes it harder to incapacitate by killing crew, though this is still the easiest way to take out this barge. Clever captains will try to angle the ship to allow aiming 3 guns on enemy targets, but this also makes the opposing ship able to hit only one of the four ammo storages. Even though this storage is high above the waterline, hitting it doesn't happen often, since the bridge in the center is a way easier target to aim at.

The SF40 Heavy's top speed is terrible. At 28 km/h (Arcade) / 22 km/h (Realistic) when fully upgraded, it might take several minutes for it to reach its destination. Always watch out for enemy PT boats and their torpedoes, as they are the greatest threat to the SF40 Heavy's survival.

The 8.8 cm FlaK guns mounted on the SF40 Heavy have a good reload rate, accuracy, and muzzle velocity, thus making it easy to aim and control. The access to distance-fuse high-explosive shells and an elevation up to 85° degrees is very effective against big attackers and bombers flying high and slow. The reload rate also makes the SF40 a really dangerous opponent. However, these guns can be quite clunky against fast PT boats due to their relatively slow traverse speed.

The 20 mm multipurpose cannons with a fire rate of 480 rounds/min is very effective against small boats and lightly armoured ships as well as planes in close combat, thus making the SF 40 also effective against light and fast naval and air targets.

The idea was met with great enthusiasm from the German military, and an order for 400 units of this ferrycraft soon followed. The order encompassed more than just one version of the vessel, however. For instance, some versions were specialised to perform anti-air duties and were meant to cover the landing troops from air attacks. These were equipped with light 20 mm and 37 mm AA guns up to the heavy FlaK 88 mm cannon, depending on the version.