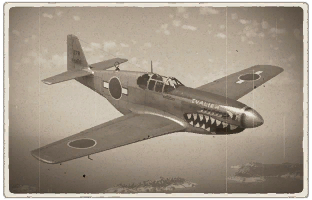 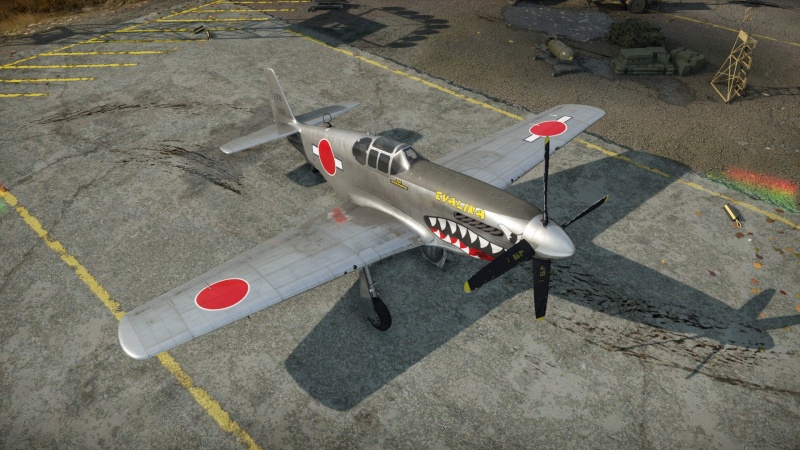 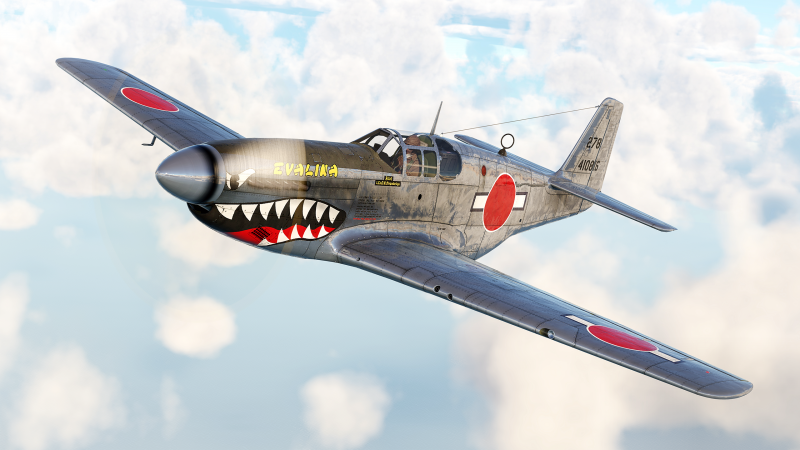 The plane was nicknamed "Evalina" after the girlfriend of its pilot 1st Lt. Oliver E. Strawbridge.

This plane got captured by the Japanese after an emergency landing on the 16th of January, 1945. She was left in her original scheme with Hinomarus painted over the American stars before she was sent over back to Japan. There she would be thoroughly evaluated, examined & mock battled with by the Japanese Army until just before the end of the war.

Unlike its Rank II predecessors, the P-51 and A-36, this plane performs well not only at low altitudes but also above 3,000 metres because of the new Merlin engine and two-stage supercharger instead of one-stage in the Allison powered models. Level speed is exceptionally good at all altitudes compared to the opposition at similar battle ratings. In Realistic Battles, it can reach 610 km/h at sea level and 705 km/h at 7,300 metres of altitude. Acceleration is also above average in level flight. The climb rate is good, especially when compared to the other American planes, and is noticeably better than the P-51D-5 and P-51D-20. At low altitude, it is slightly above 20 m/s and the plane can reach 6,000 m alt in about 7 minutes. Diving performance is great as usual, its elevator and other control surfaces do not lock up even at 700-800 km/h IAS and can pull 9G at that speed. Medium and high-speed manoeuvrability is good enough to keep up with the Bf 109 G and similar fighters for a while, and the sustained turn rate has been improved over previous Mustangs. Horizontal energy retention is very good, vertical energy retention is good, but manoeuvring energy retention is somewhat below average (but only in RB because of how the instructor controls the plane). Low speed manoeuvrability is still mediocre. The main issue is its rudder, which can lock up above 300 km/h IAS, albeit not to the extent of the P-51D models since the "razorback" fuselage provides better directional stability. The roll rate is not exceptional, veering into poor territory at low speeds.

If using Manual Engine Controls, it is worth mentioning that the Meredith effect is modelled on Mustangs. The cooling system is designed to generate a slight thrust that partially compensates for the aerodynamic drag caused by the radiators. This means that opening up the radiators even to high percentages only causes small effects on energy retention and top speed while keeping the engine nice and cool on WEP settings.

When flying with full realistic controls, the plane requires some trimming, positive for the elevator (+ 5-7) and rudder or ailerons to the right (but only below 600 km/h IAS) if you want to keep the plane straight in the level flight, when turning the plane tends to roll to the right side. Stall characteristics are very good, with the fuel set to 30 minutes it stalls out only when the elevator deflection reaches 90%. It does have a high stalling speed, however, at 175 km/h without flaps and 155 km/h with flaps.

While the Evalina only has 4 x 12.7 mm MGs, she does get late-war belts for ammo choice, giving her relatively more consistency and firepower over the American P-51C-10 with early war belts.

Since the guns are mounted in the wings, gun convergence should be considered. Anywhere between 400-600 metres should work well, but note that more distant convergence settings will make close-range shooting more difficult, especially considering the low volume of fire.

The P-51C-11 has outstanding performance compared to other planes that can meet in the same bracket (Enduring Confrontation 3, BR 3.7-4.7), level speed is higher at all altitudes than anything that it can face, so it can easily escape from anything when it finds itself in a trouble, climb rate is also very good and allows it to quickly get to the 3,000-5,000 m alt. This plane like all other Mustangs does not overheat when the radiator is set to 90-100%, it also does not slow down the plane, so it can always cruise with enabled WEP which is not limited, always engage other planes with humongous speed advantage and make use of very good mid and high-speed manoeuvrability. Sustained climb rate is worse than that of the Bf 109 F-4 or G-2 by 2-4 m/s, escaping from them by climbing away should be avoided, but still allows the plane to get pretty quick to 3,000-5,000 m alt, also the zoom climb is very good.

Starting early 1943, the Japanese had a new foe to fight in the skies, the P-51 Mustang. While Japan saw early successes, it still would prove that the P-51 is a very dangerous foe. The threat would become worse with the introduction of the Merlin-engined P-51B/C and P-51D.

As Japanese casualties started counting up because of this monster of a plane, it became a more pressing issue to get the plane evaluated and look for any flaws in its designs to even out the odds.

While Japan had some models to examine, they were all damaged beyond repair and/or were burnt-out wrecks. But this lack of research material would change eventually.

1st Lt. Strawbridge and his Evalina

One day the plane was commandeered by Second Lt. Sam McMillan, Evalina was hit by Japanese flak fire and an emergency landing was made in a ricefield near the Japanese-held Suchin airfield in the Hubei Province, China on 16 January 1945.

Sam was taken as a POW and would be part of the POW group known as "The Diddled Dozen" that were separated from all other prisoners and taken back to the Japanese homeland.[1][2]

The Japanese on the other hand would finally have a Mustang given on a golden platter. Any damage to the aircraft was quickly repaired, painted Hinomarus over the American stars and left the rest of Evalina in her original scheme. 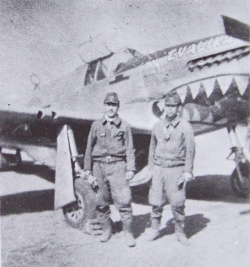 2 Japanese pilots in front of Evalina

Once the Japanese got their hands on the Evalina, she would be sent as soon as possible back to Japan at the Japanese Army Air Inspection Center in Fussa (now Yokota Air Base) piloted by air ace Major Yasuhiko Kuroe.

Upon arrival, Kuroe would evaluate and comment on the Mustang in Fussa, stating:

After its initial evaluations at the Air Inspection Center, Evalina was sent to the Akeno Army Flying School for further evaluation and mock combat against Japanese fighters such as the Ki-43, Ki-61 and Ki-84.

In mid-April 1945, Maj. Kuroe was placed in charge of a "flying circus". The group toured Japanese fighter units to train pilots how to fight the opponent's aircraft.

One of the pilots who benefited from this was a 1st Lieutenant from the 18th Sentai, Masatsugu Sumita, who recalled that he learned "how to take his aircraft out of the P-51's axis when being chased...".

At the time, the 18th Sentai was issued with the new Ki-100, one of the few Japanese planes that matched the Mustang's general performances, albeit with inferior equipment. Kuroe claimed:

The Japanese impression of the Mustang was that it was an excellent all-around aircraft with no major fault and excellent equipment. The absence of oil leaks was surprising to most, as all Japanese engines leaked to some extent. Several pilots were invited to fly the fighter. Among them was Yohei Hinoki, one of the first to shoot down a Mustang in November 1943:

After all of the intensive evaluations, mock-fights and transfers, Evalina finally gave in and her generator burnt out. As Japan at this state in the war had way more pressing issues and couldn't find any replacement parts, she would be bulldozed into a lake to never be seen again.

Both Oliver E. Strawbridge and Sam McMillan survived the war and lived to old age. However, Strawbridge never ended up marrying Evalina.

Yasuhiko Kuroe ended up being officially credited with 30 destroyed aircraft, 3 of which were B-29s, he played a vital role in evaluating and testing the Ki-102, Ki-106, Ki-109 and Ki-200 all intended to shoot down B-29s.

After the war, he returned to his hometown and picked up on agriculture as all of Japan's military would be dismantled. While starting a new life as a farmer, he ended up running on food shortage and got into some shady business and poor life choices and got into debt.

He moved to Tokyo and managed to join the JASDF (Japanese Air Self Defense Force). As an experienced pilot in both propeller- and jet-driven planes he got back into the Air Force and returned to his balanced life. He was sent abroad to study in the Royal Air Force in Britain for a year and returned to Japan eventually climbing up to the rank of Major General.

One day in 1965 Maj.Gen. Kuroe went fishing off the Echizen coast, Fukui Prefecture during bad weather and eventually drowned in the high waves. He was buried on December 7 of that year.