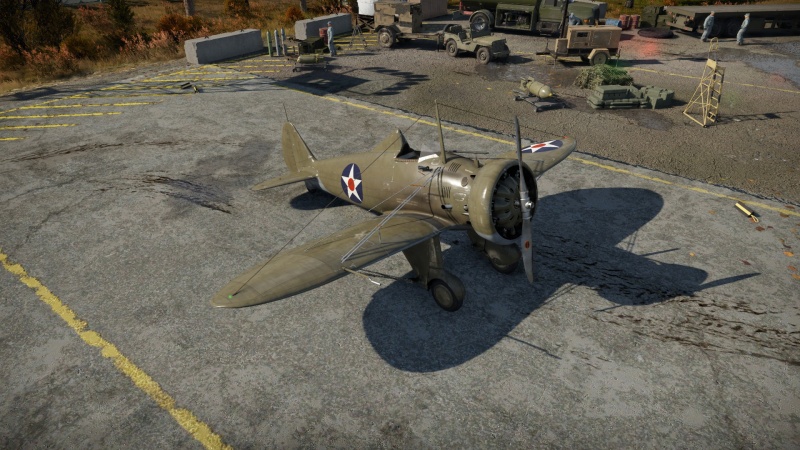 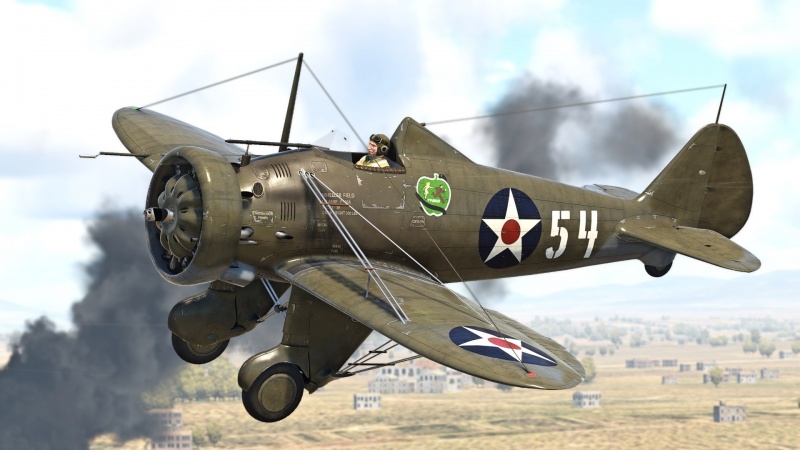 The P-26A-34 M2 Peashooter is a reserve fighter for the American aviation tree. The majority of American fighters are most effective when using boom and zoom tactics, and the P-26A-34 M2 is no different.

The P-26 possesses great manoeuvrability for a monoplane thanks to its small wings and low weight. However, its reserve counterparts are biplanes, which are much more manoeuvrable than it. Outturning monoplanes is almost always possible, but outturning biplanes is usually out of the question.

The P-26 is soundly average speed-wise, with many of the reserve biplanes outpacing it. It is still capable of catching some of the slower reserve fighters and many slow low-tier bombers.

The P-26 is a typical mid-1930's design, and just like all its contemporaries (other reserve fighters) does not have pilot armour, but is upgraded with self-sealing fuel tanks. Pilot, engine, and fuel is centrally located, but its simple design (no flaps and retractable gear) has less that could be damaged. One major advantage is excellent visibility to easily spot threats in SB battles.

Qualify the crew to "Expert", it is very cheap (1,000 SL), and put Crew points to Pilot Vitality (resist injury) and Weapon Maintenance, good to take and give damage.

Both of the P-26's guns are mounted in the nose, preventing gun convergence issues and allowing accurate fire at all ranges.

The P-26A-34 M2 is notably better than the other two P-26s thanks to the addition of a M2 Browning 12.7 mm machine gun. The 12.7 mm Browning will soon become the standard armament of American fighters, so learning its ballistics early is advantageous. The 12.7 mm Browning on the P-26A-34 M2 is only able to use the "early" set of belts, which consist mostly of less-effective armour-piercing rounds instead of the incendiary rounds that make the 12.7 mm so powerful, but it still represents a huge upgrade over the 7.62 mm Browning, which has very poor damage output.

The best belt for the 12.7 mm is likely either Universal (if you need tracers) or Stealth (if you can aim without tracers or in Arcade Battles). Default is also viable, although it contains a mostly-useless ball round. These belts have M1 Incendiary bullets in them, which translates to a higher fire chance, which is where most of the damage will come from when using machine guns.

The best belt for the 7.62 mm is Universal or Stealth, as both contain a good mix of AP rounds (best damage with rifle-caliber machine guns) and incendiary rounds (a little bit of fire chance).

The P-26A-34 M2 can be outfitted with the following ordnance:

The P-26 can mount two 100 lb bombs, which drop together. These bombs can be used to decent effect against light ground targets, such as AI artillery and player-controlled open-topped tanks. The bombs are pretty weak, therefore a direct hit will be needed to destroy harder targets such as tanks.

A major asset for this P-26 variant is the .50 cal M2 (12.7 mm) upgrade machine gun with 2.5 x the penetration power making it much deadlier to targets (don't forget it will be on a separate trigger).

Study your opponents, this is critical on how to counter them as there is no single way to counter all targets. The Japanese Ki-10 and Soviet I-15 are this aircraft's greatest threats, if they get on your six, evade like crazy and try to get them to overshoot (never turn); teammates will be essential in this process. Bombs with 0.5 secs delay could work. Other fighters like the German He 51 you could outrun them, but do not try to turnfight them. With higher BR units you may be just able to outmanoeuvre, but the best is constantly scan the sky for threats. Other rank 1 aircraft vary in threat level. Besides fighters, attacking bombers is a viable option, however, be mindful of defensive turrets as there are a few 12.7 mm machine guns and 20 mm cannons out there.

The P-26 saw the of its combat serving in the Chinese Nationalist Air Force during the Second Sino-Japanese War, against Japanese Ki-10s, and notably A5Ms in some of the first all-metal monoplane dogfights. Although it performed admirably in the pursuit role (bomber interception), in air-to-air combat with Japanese fighters, the deficiencies of the model showed.

In US service, the P-26 had a similar record. During the Japanese invasion of the Philippines, the P-26s scored only a handful of air-to-air kills against Japanese attackers. On December 24, 1941, their crews burnt the remaining planes to prevent their capture. Of the one hundred and fifty-one built, only nine airworthy P-26s remained on Christmas 1941, a single squadron defending the Panama Canal Zone, which was removed from service shortly after.