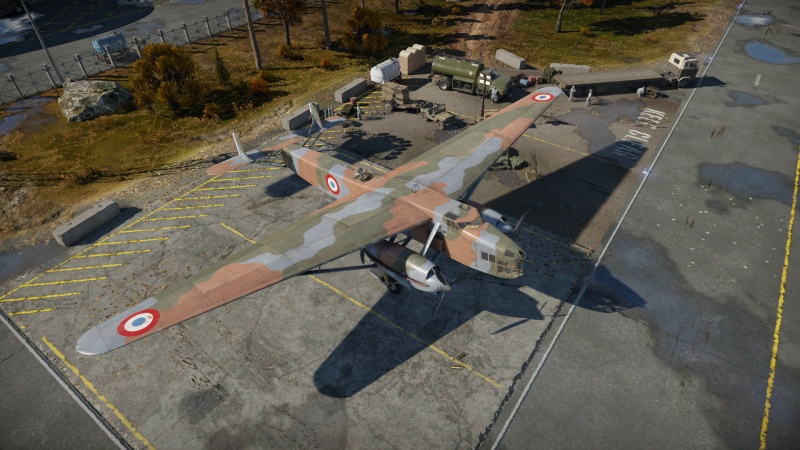 Like its predecessor, the F.222.2, the N.C.223.3 is a heavy hitting bomber with okay manoeuvrability at low altitude and low air speed, and can carry a staggering 52 x 50 kg bombs. Combined with its frequent presence in Ground Strike matches with only light vehicles, it will make short work of any (or even all) groups of armoured cars and AAA it crosses paths with. However, the ability to carry larger bomb loads later in its upgrade tree turns it into an exceptionally capable base killer, often time wiping out bases solo. As of update 1.97, 5 of the 200 kg No.1 bombs can destroy a base, so with the upgraded bombload you should be able to easily destroy 3 bases, and keep all 12 100kg No.1 Bombs for the enemy airfield, or to destroy the fourth base in some maps . However, it is still capable of turning entire columns of medium tanks to flaming scrap if escorted in higher level battles, with Hispano gun turrets available if an enemy tries to attack the plane.

Farman Aviation Works began working on the F.220 bomber design in 1925. This aircraft was based on a successful earlier design of the F.211 which was a parasol wing, four-engine monoplane utilizing tractor and pusher engines. While the F.211 never entered production, it served as a base for the F.220 to be designed and built from. The first successful flight of the F.220 happened on 26 May 1932.

The later F.223 which came after the F.222 saw significant changes, not only to name as it became NC.223 after Farman was absorbed into Société Nationale de Constructions Aéronautiques du Centre (SNCAC) which was the nationalization of both Farman Aviation Works and Hanriot in 1936. The aircraft’s tail section was reworked and went from a single vertical stabilizer to a twin-stabilizer setup and the fuselage was refined to be more aerodynamic. Another upgrade came in the form of changes to the ventral and dorsal turret weapons. The Mle 33 7.5 mm machine guns were replaced with the more powerful H.S. 404 20 mm autocannons.

On 7 June 1940, a variant (NC 223.4) of the French Naval Aviation was the first allied bomber to fly into Germany and bomb Berlin, the flight dropped eight 250 kg and 80 x 10 kg bombs on Germany’s capital. While the ordinance was not much, the psychological impact was the goal and the raid was reproduced three days later. NC 223 bombers continued to serve in bombing roles until June 1940 when they were transferred to North Africa to fulfill the role of transport aircraft.