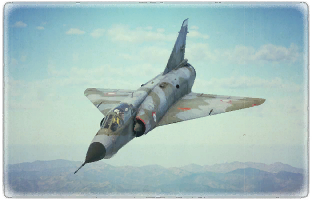 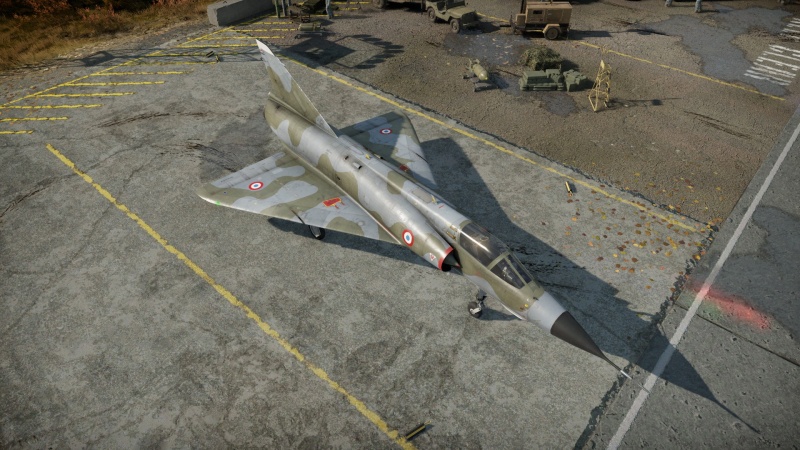 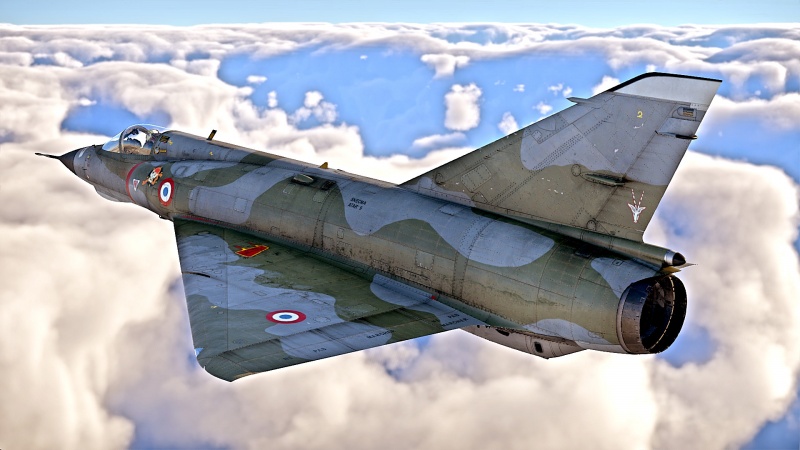 The Mirage IIIE is a rank VII French jet fighter with a battle rating of 10.3 (AB/RB) and 11.0 (SB). It was introduced in Update "Ixwa Strike". Contrary to its older sibling, the Mirage IIIC, the Mirage IIIE represents a (successful) attempt to integrate air-to-ground capabilities into the Mirage III line of aircraft. These capabilities are achieved by the addition of a ballistic computer to aid in the destruction of ground assets with guns, bombs, and rockets. The aircraft also receives numerous improvements, such as a new version of the Atar 9 engine, which is not only slightly more powerful, but also much more responsive. An RWR system and a countermeasure dispenser is also installed.

Overall, the Mirage IIIE is flown like the Mirage IIIC. The key feature of the Mirage airframe is its delta wing. Delta winged aircraft present tremendous manoeuvrability, at the cost of energy bleeding. The Mirage is no exception. While capable of supersonic flight, even at low altitude, and loaded with its air-to-air armament, high-G manoeuvres provokes as much deceleration as using a giant airbrake. This is, in fact, what a delta wing becomes, under high incidence angle, due to its very high vortex lift.

In general, the Mirage IIIE is nimble and fast, but it lacks the engine power of its contemporaries, such as the MiG-21bis or the F-104 series. Getting up to speed, or regaining it will be a bit longer. A trade-off for the Mirage IIIE's manoeuvrability.

Being a very light aircraft, the Mirage IIIE does not bear any sort of armour. It is to be noted that it has a very fragile rudder, which is mandatory to fly. Even as little as losing its moving actuator is enough to make the Mirage IIIE uncontrollable. The wings, being built upon titanium longerons, are quite sturdy and can sometimes survive hits.

The lack of armour on the Mirage can be compensated by the very small size of the aircraft.

The entirety of the AA missile armament of the Mirage IIIE is stacked in a single line. The AIM-9B missile will be of moderate help. The Matra 530 will be of better efficiency.

The research of the countermeasures should as well be a priority. This component alone is probably the most impactful addition to the Mirage IIIE, compared to the IIIC.

Other than that, the G suit is also an important module, because it allows the pilot to remain conscious during a full Immelmann, split-S, or barrel roll. This phenomenon is due to the high speed reduction of the delta design.

All other components can be researched at the user's discretion.

The Mirage IIIE is armed with:

At this battle rating, proper usage of countermeasures is next to mandatory. The sheer amount of missiles in the air at every instant, and the fact that the Mirage IIIE is a top-tier aircraft, makes the flares the most important part of the Mirage IIIE's self preservation. As for quantities and type, it is recommended to always carry chaffs as well, SARH and ARM missiles being sometimes used at such BRs. Full flare composition is permissible when in a downtier match, where such missiles are much rarer. It is also notable that missiles encountered at such BRs can and will discriminate the jet from its flares. Ample usage of flares and afterburner cutoff must therefore be performed to ensure a successful evasion.

The Mirage IIIE can be outfitted with the following ordnance presets:

The Mirage IIIE comes with a pair of DEFA 552A cannons, with 125 round per gun, for 250 rounds total. These guns output a moderate shell velocity (but high rate of fire), but the DEFA shells are extremely destructive, and can blow a wing off of even the sturdiest aircrafts, such as the F-4E Phantom II. The Air targets belt is composed only of HE, incendiary, tracers. Overall, the best pick of shells one could want for air-to-air combat. The Ground targets belt can pierce moderate armour, and are nothing to write home about. They will shred APCs and IFVs, but not MBTs.

Equipping a loadout that doesn't include the 30 mm cannons allows use of the rocket booster, totalling 105 seconds of thrust.

As with most aircraft of this level, the Mirage is as good as the missiles it carries. The AIM-9B is an IR seeker missile of the very first type. It pulls few Gs, cannot orientate its seeker head and is very easily distracted by flares. Still, some kills can be expected on unsuspecting enemies, or enemies engaged with another aircraft in a turnfight, and low on energy.

The Matra R530 is a radar guided, medium range missile. Only one can be carried, but it is one of best SARH missiles in the game. As a counterpart, the Cyrano radar of the Mirage IIIE is quite small, with range rarely exceeding 20 km. Inside this range, the missile has good range and manoeuvrability during the entire flight time. A good addition to the Mirage IIIE's arsenal. The SARH capability of the missile can be traded for the IR seeker of the Matra R530E, making it the biggest IR seeker of the game. This version does not require radar lock, but cannot be fired in front aspect, and can be distracted by flares, where the Cyrano radar guiding the R530 can only be disturbed by chaff, which is used much more rarely.

As a tier 4 modification, the Mirage IIIE receives the dreaded Matra 550 Magic. This IR seeking missile of second generation is an excellent weapon, being both extremely manoeuvrable (pulling 30Gs, sometimes more), very light and reactive, and quite resilient to flares. Under two kilometres, and launched in appropriate conditions at subsonic speeds, this missile is virtually inescapable. It is to be noted that this missile, thanks to its canted launch rail, can be launched under significant G-load. Its only two drawbacks are its short range, and the limited number of units carried under the Mirage wings, with only two of the type. Comparatively, the F-4 Phantom series can carry 4 IR missiles, and 4 to 6 for the MiG-21 series, J35 Draken, and F-104 series.

As for ground attack, the Mirage III E carries the usual load of post-war French ordnance, in the form of 250/400 kg SAMP bombs, SNEB HEAT rockets, and the AS-30 missile. The deployment of these weapons can be aided by the ballistic computer.

The AS-30 Nord missile is a MCLOS, AS-20 derived, heavy warhead HE missile. Only one can be carried, and it is quite hard to use, but the damage output on ground targets in mixed battles is enormous. It is not uncommon to score two kills with one missile.

With the introduction of laser-guided weaponry, French nation players usually prefer the Jaguar A for the ground attack role.

The Mirage IIIE is an improvement over the Mirage IIIC in nearly every aspect. Its delta wing permits high-G, speed bleeding manoeuvres, and should be used to force an opponent to overshoot, and give it chase with missiles or guns.

The missile load of the Mirage III E is quite light, with only 3 missiles, but the missiles are excellent, and should rarely miss. The addition of the flare dispenser is also of excellent help against the very dangerous IR seeking R-60 missile, which does not perform well with the saturation of its target with flares. Note that flares are mostly inefficient when afterburner is on, and turning it off for mere seconds can be the difference between life and death.

Overall, sticking close to the ground, at high speed, and making missile passes on opponents is a good way to reach victory. Dogfights should be engaged only if the target position is advantageous, and the Mirage IIIE cannot just bleed out of energy and re-accelerate away.

The Mirage IIIE can be equipped with the SEPR 941 booster rocket if the guns are dismounted. This strategy is considered as to be avoided, the loadouts permitting the removal of the guns are very restrictive. The booster gives an output of 1.5 extra ton of thrust, and can burnt for 105 seconds before running dry.

For ground attack, the Mirage IIIE is of moderate use. While it can still carry bombs, it is a fighter by essence. It is to be noted that the Mirage IIIE can carry its entire AA armament, plus two air-to-ground weapons, on two extra hardpoints.

Since the addition of BR 11.3, the Mirage IIIE finds itself in a new position, where its playstyle changes, based on the game's BR. As a top-tier jet, the Mirage IIIE fulfills prefectly its air domination role by itself. When uptiered, it is recommended to take a more support-oriented approach to combat, and to pierce through furballs at great speed, launching a missile or two.

The Mirage IIIE is a multirole fighter version of the Mirage III series of attack aircraft manufactured by Dassault Aviation for the French Air Force. The aircraft was a follow-up to the earlier Mirage IIIC, featuring a fuselage extension, countermeasures and increased weapons capabilities. The first Mirage IIIE was built in 1964 and would quickly become the most popular variant of the Mirage in French service: the last Mirages would not be retired from French service until 1994.

Compared to the earlier Mirage IIIC, the Mirage IIIE featured numerous improvements: notably, the fuselage was stretched by 30 cm (12 in) to accommodate additional avionics and fuel tanks. It was updated with the CSF Marconi Navigation computer used on the Mirage IV nuclear bomber. The new version of Cyrano II fire control radar added some new air-to-ground modes like ground-mapping of air-to-ground ranging. Also, the most obvious change in external characteristics was the pod under the nose which contain the CSF Marconi Doppler Navigation radar. Besides, a Thomson BU radar warning receiver was fitted in the tail-fin which can provide warning information for the pilots. The Head-Up-Display unit was also changed from CSF95 to the new CSF97 which added the air-to-ground capacity too. Thanks to the new structural strength design into the airframe, the Mirage IIIE fighter could carry 4,000 kg payload in total.

The Mirage IIIE was the most common Mirage III type in service with the French air force, with a total of 183 aircraft delivered, compared to 95 Mirage IIIC and 70 Mirage IIIR aircraft. The last Mirage III would not retire from the French air force until 1994, at which point it was replaced by the Mirage 2000 and later the Dassault Rafale. The Mirage IIIE was the most popular version of Mirage III family, with 523 being built and delivered to both France and customers around the world, the Swiss and Pakistani versions can equip Chaff/Flare dispenser in to the bottom of the fuselage too. The Mirage III would see extensive service in numerous wars for several air forces; notably, the Israeli air force used Mirages during the Six-day war and Yom Kippur War, while Argentina employed its Mirage IIIEAs against British forces during the Falklands war.