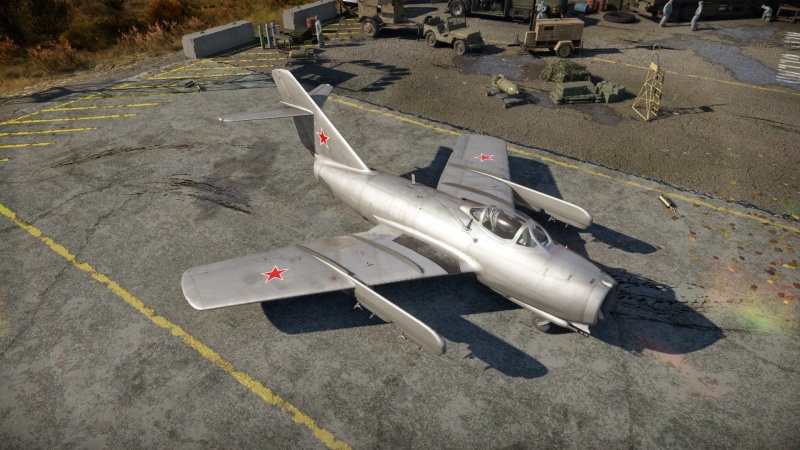 The MiG-15bis ISH is a premium gift rank V Soviet jet fighter with a battle rating of 8.7 (AB/SB) and 8.3 (RB). It was introduced in Update 1.85 "Supersonic" as a premium pack but was removed from sale after the 2019 Birthday sale. The MiG-15bis ISH has since been made temporarily available for purchase in-game (

The MiG 15's main opponents are the same as most Soviet jets, mostly American and British jets, although some piston-driven aircraft will be a threat at low speeds. The MiG is not very good at turning at high speeds, as it loses speed very easily. If you intend to support your ground allies in any case, bombs are the better option. Rockets are only effective against light ground targets such as AA emplacements and aircraft on the ground. Try to avoid turning battles as the MiG is not exceptional, however, it is better than most Soviet aircraft at that battle rating. Being up-tiered is not good news since Tier 6 aircraft have some access to air-to-air missiles. Here avoiding aircraft in some situations is your best bet, that said the cannons, if aimed carefully will rip an aircraft to pieces, causing critical hits or sending them back to the hangar.