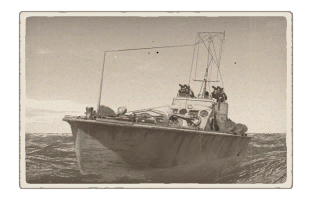 MTB-1 2 series internals (starboard side). Note the ammo storages just in front of the bridge.

Any gun in the game will easily be able to penetrate the hull and superstructure at any practical range.

MTB-1 2 series can be hull-broken by any gun that is greater than 4 inches (102 mm) in diameter. Hull-break is triggered when any such gun hits and destroys any hull compartment — or in some cases, the bridge — with a high-explosive round, upon which the rest of the boat will be destroyed. At MTB-1 2 series' battle rating, there is only one gun capable of hull-breaking her:

MTB-1 2 series' hull is split into three compartments. The first compartment starts at the bow and ends between the pumps and the ammunition storage; the second ends just behind the bridge; and the third ends at the stern.

With a crew complement of 11, MTB-1 2 series' overall survivability is below-average.

The primary armament consists of eight 7.72 mm Lewis 1916 machineguns in two quadruple mounts, one on either side of the bridge. There are 1,940 rounds of ammunition available for each mount, 485 rounds per gun, for a total of 3,880 rounds. Stock, the mounts can traverse horizontally and vertically at a rate of 64°/s; with the "Primary Armament Targeting" modification installed, this is increased to 75°/s. Each gun has a magazine capacity of 97 rounds and a rate of fire of 550 rounds/min. With a stock crew, the guns can be reloaded in 18.2 seconds; with an aced crew, they can be reloaded in 14 seconds.

MTB-1 2 series can carry two 18 inch Mark XII torpedoes. These are carried internally in the aft of the boat and are launched through the transom tail first, i.e. facing forwards.

Note that the Torpedo Mode modification on MTB-1 2 series has the opposite effect compared to most other vehicles. Typically, the maximum range is increased at the cost of speed. The Mk.VII depth charges are carried around the bridge area, three on each side. They are dropped one at a time in the following order:

MTB-1 2 series is, for the most part, identical to her tech tree equivalent, MTB-1 1 series. She shares many of the same drawbacks — low per-hit damage, low maximum range, and poor survivability — but with one key difference; whereas the gun turrets are mounted on the fore and aft on MTB-1 1 series, they are mounted side-by-side amidships on MTB-1 2 series. This allows MTB-1 2 series to bring all of her guns to bear without having to expose the rear hull compartments at all, greatly increasing her potential survivability. In general, MTB-1 2 series has the exact same playstyle as MTB-1 1 series but with a bit of extra versatility and survivability because of the gun mount placements. Always angle the hull to show as little of the sides and rear and possible and stick to close-range engagements so that the guns' low maximum range isn't an issue. Also, keep in mind that MTB-1 2 series' ammunition is very limited, only being able to carry five reloads per gun, so only fire when you know you can land the shots and make every shot count. Despite that, it's almost always better to empty out the magazines after each engagement because MTB-1 2 series, along with MTB-1 1 series, has the longest reload of any rank I naval vehicle. Emptying the magazines is done to reload the guns in safety, and while this does waste ammunition, it's certainly better than the alternative of running out of having to mid-engagement.

The firing arcs for the gun mounts are very good, both of which are able to in all directions except in a small ~47° arc in the direction of the other gun mount. They both traverse relatively quickly and can rotate 360°, so switching direction during an engagement isn't much of a problem. That said, as said before, it's best to angle the hull to show as little of the rear hull compartments as much as possible.

The best ammunition choice is the 7.7 mm AP belt since it has the highest ratio of AP to T rounds. While the 7.7 mm API belt may look tempting because of the incendiary tracer rounds and lack of tracer rounds, the IT rounds can actually be stopped by some wooden hulls and almost all metal hulls. Additionally, their damage output is closer to that of the standard tracer rounds than the AP round, and they rarely start fires, if ever. While the IT rounds are technically the best against aircraft, with such a long reload time to switch to the API belt and with barely any noticeable difference, there's really no point in using the API belt for that either. Take only the AP belt.

The 18-inch Mk.XII is fairly average in terms of maximum speed and range, though it has a very low TNT equivalence compared to other torpedoes. Still, a hit with the Mk.XII torpedo is more than enough to destroy any boat. Otherwise, this is torpedo is unnoteworthy. Once unlocked, always have the Torpedo Mode modification installed. The higher maximum speed is much more valuable against the fast boats of this tier, and the maps are small enough that the decreased maximum range doesn't really matter.

Be aware though that, unless already launched, the torpedoes can be shot at, and, if destroyed, there is a large chance the entire boat will be destroyed along with it. To avoid this, fire the torpedoes early on or simply don't take them at all. Torpedoes are a situational weapon, so it's largely down to personal preference whether you want to take them or not.

There is no practical reason to use depth charges on any naval vessel in the game. Although they usually result in a one-hit kill if used properly, they are extremely situational and are actually a liability in most cases. This is because, unless they're dropped, they essentially act as exposed ammo racks.

With some luck, sailing up right next to a slower target and dropping a depth charge can lead to some success. If attempting this, remember the depth charge drop order and that there is no reason to set the depth charge delay above the minimum 3 seconds, since a higher delay time means that the depth charge will only sink further, and thus away, from the target. Again, this is extremely situational.

The recommended loadouts are, depending on personal preference:

These boats had a standard displacement of 18 tons and had a length of 60 ft. 4 in., a width of 13 ft. 4 in., and a drought of 2 ft. 10 in. at standard displacement. They were powered by three Napier Sea Lion petrol engines, each driving a single shaft, and could reach speeds of around 30-35 knots. Each boat could carry two 18 inch torpedoes which were stored internally on rails above the engines. On the stern were two more rails that could be folded down to the transom, extending the torpedoes' rails outside of the boat. The torpedoes fired facing forwards down the rails, after which the boat that fired them would have to turn to evade their path. In addition to torpedoes, the boats were also armed with a number of depth charges and, depending on the exact boat, up to eight Lewis guns.

The 1st MTB Flotilla was sent to the Mediterranean at the start of WWII and was based at HMS Vulcan in Malta. They were soon recalled back to England in December 1939 to be based at HMS Beehive, Felixstowe, though MTB 19 was sent to HMS Vernon, Portsmouth. Along the way back, due to bad weather, MTB 6 had to be foundered. After they arrived, the remaining boats continued to operate in the English Channel until they were either lost or replaced. Those lost were MTBs 15, 16, and 17, all of which were mined in 1940.