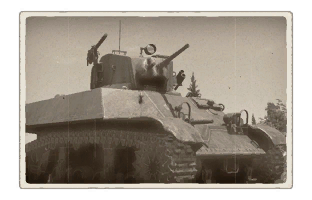 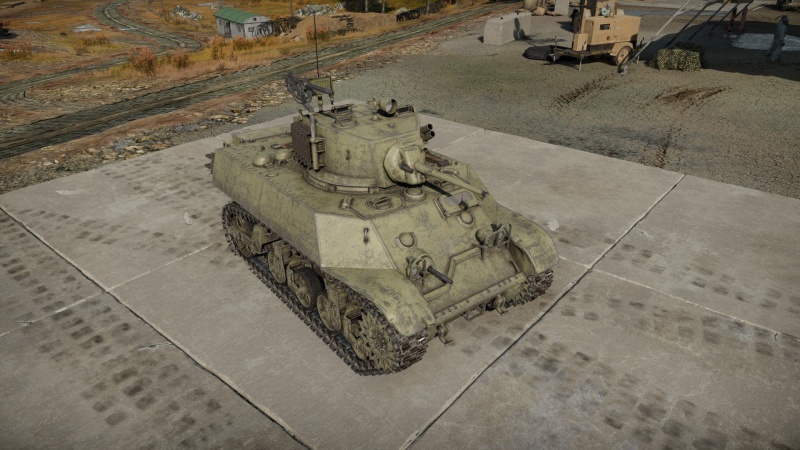 The frontal armour on the ␗M3A3 Stuart is pretty tough for a light tank with 25 mm on the front & sides of the hull, and a large, 50 mm thick gun mantlet covering up most of its frontal turret. When angled correctly it can bounce off quite a few shots. However it can still be easily penetrated by average guns on its BR. From the front the 4 crews are sitting pretty close together, thus making it highly possible to get knocked out by shells with explosives like the Soviet 45 mm AP or the German short 75 mm APHE. The transmission and the engine are all quite small and low, and the ammoracks are also small, reducing the chance of being immobile or ammoracked. There is also an empty area under the turret crews and in front of the driving compartment, which will absorb those shells with weak damage.

One of the best aspects of the ␗M3A3 Stuart is its superior mobility. It has a top speed of 58 km/h and doesn't lose too much speed on soft terrain, making it one of the fastest tanks at the BR alongside with the famous BT series tanks. The tracks are quite large and grant you a good mobility on hard (solid ground, roads) and soft terrain (mud, snow, sand).

As it benefits from regenerative steering, turning on the spot with the M3A3 Stuart (China) is easier than for most tanks at the same BR. Regenerative steering consists in letting the unsolicited track rotate when the tank is turning instead of locking it. The hull is also short and wide enough, allowing it to turn agilely. The reverse speed is average: it will not get you out of a dangerous situation quickly but isn't a handicap either. The ␗M3A3 Stuart reaches 18 km/h when fording and 16 km/h when driving uphill.

While its high speed is an advantage, it can turn into a disadvantage when manoeuvring at high speed: the ␗M3A3 Stuart starts skidding uncontrollably if you take a sharp turn. Be aware of this before rushing towards the frontline: limit your maximum speed, know the terrain and anticipate the braking phases.

Light and medium obstacles (fences, posts, bushes and small trees) are not a problem for the ␗M3A3 Stuart but large obstacles will reduce your mobility: avoid them.

The ␗M3A3 Stuart is armed with a 37 mm cannon as its main armament, the same gun as the preceding M8. While being at a BR 1.3 higher, the gun still packs a fierce punch if aiming at the correct area and firing at the correct distance. It is a small calibre fast-firing gun with a maximum penetration of 84 mm at 100 m (M51B1 shell), being able to penetrate most of the opponents it will face. The penetration power and gun accuracy drop a lot beyond 500 m and become unreliable past 700 m. The gun is equipped with a vertical stabiliser, giving the ␗M3A3 Stuart a huge advantage in some cases as you can fire precisely while moving, but keep in mind that it activates only when the tank is driving under 10 km/h.

The M3A3 Stuart (China) has a limited choice of ammunition, focused on dealing with armoured vehicles:

Knowledge of enemy vehicle layouts is essential with ammunition lacking post-penetration explosive damage. Make sure to target modules and crew positions to maximise the damage. Disabling the enemy gunner on your first shot will be critical to win engagements as you'll most likely need several shots to destroy an enemy vehicle. 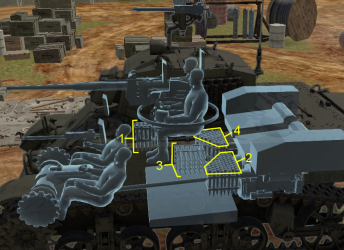 The ␗M3A3 Stuart has two 7.62 mm M1919A4 machine guns, one being coaxial to the main gun and the other roof mounted on the right side of the turret. The two machine guns can quickly incapacitate the exposed crews on some vehicles or do some serious damage to those low-passing planes. However it lacks the ability to effectively damage even lightly armoured vehicles due to its low penetration of only 10 mm.

The ␗M3A3 Stuart is best used as a point-capper and a hit-n-run tank. Its extreme mobility gives the player uncountable ways to play with the enemy. At the start of a battle, it can quickly cap a nearby point first, but note that some wheeled vehicles, like the Sd.Kfz.234 series, can still outrun the M3 on-road, therefore posing a great threat. Or it can get to an ambush position near the point and wait until the prey comes. With its reliable gun, the M3 should be able to destroy the first wave of enemies easily and quickly.

In the middle stages of a battle, the M3 can utilise its excellent mobility and get to wherever needs help while carefully looking around. If the ␗M3A3 Stuart unexpectedly encounters an enemy in its path, don't panic! Circle around the enemy and try to force it to turn, this way it usually cannot aim at the ␗M3A3 Stuart accurately, then reduce the ␗M3A3 Stuart's speed down under 10 km/h and keep moving. Now the ␗M3A3 Stuart's stabiliser will give the tank a great chance to hit while on the move as it stabilises the gun when the tank is under 10 km/h, making it easier time to put the gun on target while moving compared to the enemy.

The frontal armour of this tank is also quite good at a distance. Find a building or a big rock as cover and angle the hull for about 40 degrees. When ready to fire, go out of cover and stop once the 37 mm gun is exposed, don't go out too much or the thin side armour will be exposed to be hit. Keep in mind that with this tactic the player should only engage the low-penetrating enemies at more than 400 m, as their penetration will drop significantly at that distance while the M3 can still penetrate 73 mm of armour, which is enough to go through most of its opponents like the Pz.IIIs.

Specific enemy vehicles that bear mentioning are firstly any Germans with the 20 mm KwK/FlaK38 cannon, this gun might be small but can have up to 64 mm of penetration, which is enough to go through the ␗M3A3 Stuart almost anywhere. These guns can also fire 10 rounds at 280 rounds/min before having to reload the clip, meaning that they will very easily take out your crew before you have a chance to respond. To counter, the best chance you have is to angle your frontal armour which can make it difficult for the PzGr 40 rounds to penetrate. The Russian T-50 and T-126 are vehicles you will also see commonly, these have fairly thick and angled frontal armour that will prevent you from easily getting through. These tanks can also carry an APHEBC round that will destroy you in one shot with little difficulty, to counter you should use your speed to attempt to get a side shot into either the turret or engine. If the T-50 cannot move you can outrun its turret and finish it without much difficulty.

It is likely that the M3 will encounter some rough heavies, like the Matilda III and the B1 bis. The best tactic against these types of targets is to use the ␗M3A3 Stuart's fast speed, get within 200 m from them and attack, with shooting at point-blank range being the most effective way. Before conducting an attack, check the ␗M3A3 Stuart's and the enemy's surroundings to make sure no one will ambush the ␗M3A3 Stuart. While charging, use the ␗M3A3 Stuart's quick turns to suddenly change direction to avoid being shot if they are aiming and firing at the ␗M3A3 Stuart. Once the tank is at the ideal distance, manoeuvre so that the gun is vertical to their armour. Do not shoot if the enemy is angling! The small calibre 37 mm gun is very likely to bounce off or not penetrate against sloped armour.

The M3A3 Stuart was a substantially exported tank from the United States. Due to its proven capabilities in all theatres of the Second World War, it found itself on the battlefields of Eastern Asia. The Republic of China were supplied with over one thousand M3A3 Stuarts, making them a prolific user of the Stuart.[1] Some tanks during the late war use were retrofitted with light up-armour packages to further protect the front and sides of the tank thus extending its service life.[1] By 1946, the Kuomintang Armoured Corps were still operating at least 116 Stuart light tanks.[2]

The use of this tank would continue post-war into the Chinese civil war. M3A3 Stuarts served with both Kuomintang and Communist Party forces until at least 1949 when the Civil war concluded in Communist Party victory. The Kuomintang were able to transport tanks over the East China Sea as they escaped to Taiwan.[1] Some of these tanks remain today in museums in both China and Taiwan.

In the South Shandong campaign in January 1947, the Shandong and Central China Field Army wiped out the 26th Division and the First Fast Column of the Kuomintang equipped with U.S. armaments, and captured one M3A3 light tank[3]. The tank was later put into the East China Field Army tank unit and participated in the Jinan Campaign and the Huaihai Campaign. In the battle of Yonggumen in the Jinan Campaign, crew Shen Xu drove this tank and completed his combat mission successfully. After the war, this tank was awarded the title of "Memorial Tank" and Shen Xu was known as the "Iron Man Hero."[4] In 1959, this M3A3 was transferred from the First Tank School to The Military Museum of The Chinese People's Revolution, where it is still on display today.