The M18 Gun Motor Carriage "Black Cat" is a premium rank III American tank destroyer with a battle rating of 4.7 (AB/SB) and 5.7 (RB). It was introduced in Update 1.49 "Weapons of Victory" as a pack vehicle and was eventually removed from the store, but was later reintroduced for War Thunder's 7th anniversary as a premium purchasable in-game for 2,980 Golden Eagles

. The M18 "Black Cat" is a gift version of the M18 Hellcat, with little difference in performance. The 805th's M18 antitank vehicle was one of the most flamboyant. Its tactical designation was drawn in white against a black background. On the sides of the turret and body were white areas with two vertical black stripes and one horizontal one. On the sides of the body next to the mechanic's station was a roundel of a cat biting through the body of the tank. It was the custom in the division to give their vehicles names, but the first letter of the "name" had to be the same as the company's letter. So the first vehicle in company B was called "Black Cat". 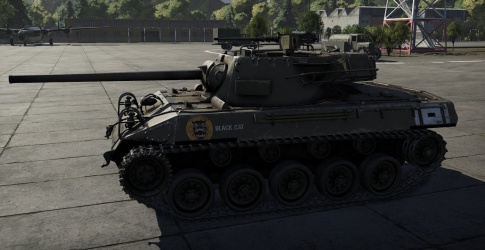