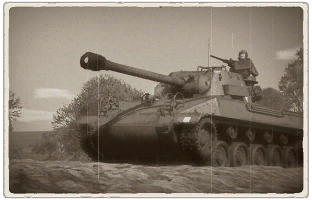 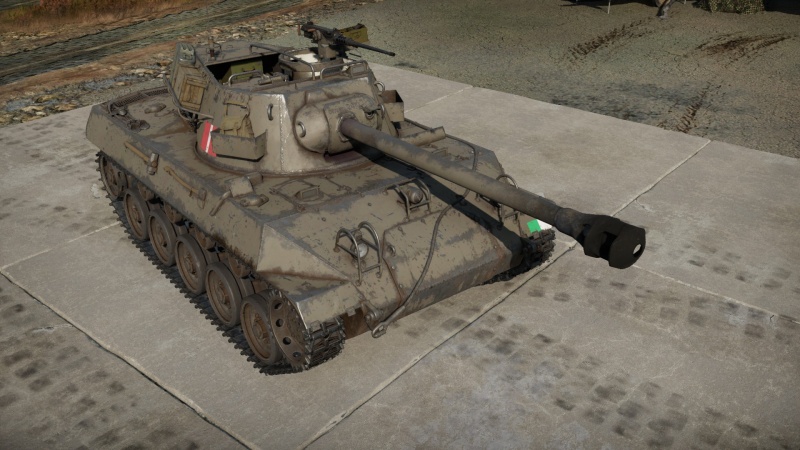 The M18 "Hellcat" compensates the lack of anti-tank capability by having absurdly fast manoeuvrability. While it loses access to APCR, this is justified seeing how it doesn't face very armoured vehicles, the likes of Panther D, Tiger H1.

The main weak point of M18 is its very thin armour, a feature that actually allows the M18 to reach its high speed. The thin armour makes it possible for any enemy tanks to penetrate the vehicle. A single hit would destroy many critical components in the M18 or cripple the crew. The only saving grace is that standard AP rounds may over-penetrate the armour, doing minimal damage to the internals. Thus, when facing the M18, it's best to use AP rounds with explosive fillers or HE and HEAT rounds while avoiding usage of pure AP rounds.

The M18 (Italy) has extremely thin armour throughout its construction. As such, a player with the M18 should throw away any notion of trying to survive a shot and instead aim to avoid being hit at all. With an open-top construction and the placement of certain crew members, even enemy machine gun rounds can knock out the crew members inside and lower combat efficiency.

The thin armour is also both a blessing and a curse for the vehicle. It is a curse as it means the vehicle can suffer through the overpressure damage mechanics. A single HE shell has the potential of knocking out the M18 instantly regardless of its calibre. The blessing is that if the enemy kinetic round hits the M18 without triggering the fuze, the M18 may end up with minimum critical damage such as a damaged module or crew member. As such, there can be second chances for this vehicle, but this should not be relied upon as a combat strategy.

The M18's module configuration is rather standard with the transmission in front and engine in the back. The spread out nature means there are more "wiggle room" for kinetic shells to hit and pass through around the modules.

Though the previous section on armour may imply poor survivability, the M18 (Italy)'s shining trait will be in its mobility. It produces enough engine horsepower to become a speed demon on the battlefield, quickly traversing through rough terrain to get to advantageous positions to ambush enemies that are just starting to get to the fight.

As with every ground vehicle Parts and FPE are an absolute top priority. Following that, depending on player preferences, one of 3 should be researched: Horizontal Drive (close-range, flanking), Suspension (medium-range) or Adjustment of Fire (long-range of a typical engagements). Following this the goal is to get rank IV mobility improvements in order Filters -> Engine -> Transmission. On rank III, along the way, the Crew Replenishment should be prioritized, as its an open-top vehicle, so it will suffer significant causalities from enemy airplanes. If your preferred engagement range is above 700 m then the Elevation Mechanism should be researched. Otherwise: Mobility upgrades are the most important, shells are the lowest priority, as even the situational advantage of the M93 shot is not worth researching over improved mobility, or even accuracy.

The 76 mm M1 is an extremely capable gun with a high damage potential and a very good gun handling. Once upgraded, the turret has very fair guidance in both: horizontal and vertical axis allowing to quickly catch pot-shots, though given exceptional mobility of the platform even it struggles to catch up with the near-instant hull rotation.

Relocate: - This movement will have to be done again and again. Choose a good spot wisely, remove the foliage if necessary to get a clear field of fire. When in the fire spot, use the gun depression and stay in a hull-down position until a target is located. Once a target is locked on, aim at critical components. Try to immobilize the enemy by firing at the engine or transmission, or remove their firepower by shooting the gun or breech, or for instant destruction with a shot to the ammo storage. The last option can work very well or not, as skilled players only carry a few rounds of ammo. If positive that the enemy hasn't discovered the firing spot, go for another shot. Stay attentive that none of the enemy's teammates has also located the firing spot. If detected, hide immediately and relocate.

Flanking: is the most dangerous manoeuvre of all because the vehicle will have to be exposed as it moves to the enemy's rear, but it is very effective when it's coordinated with other vehicles. A distraction is needed to gain the enemy's attention while the M18 makes its move. Isolated enemy units are very vulnerable to this tactic. Using the M18 speed to get to the rear and as the enemy heads toward the objective, the firing perspective should give a very clear view of the enemy's side armour. A good shot with the M62 APCBC shell could knock out the enemy rather quickly, but if using solid AP shots like the M79, aim at critical components on mobility and firepower before knocking out the crew or ammo stowage.

Avoid flat terrain - Flat terrain means that the Hellcat will become an easy target for virtually any vehicle by exposure, especially when not moving or when moving in a straight line. Open plains are the bane of the Hellcat. Whenever possible, one should try to stay amongst hills.

Throughout the Second World War, the USA would be experimenting with many different tanks and military vehicles, in the hopes they'd be put into service to help the war effort. In December of 1941, a new requirement from the US high command would initially request a vehicle which incorporated the Christie suspension system, and armed with a 37 mm gun. Considering that during those times, for most new vehicles, they were often derived from a previous existing design, mainly done to save time and money, this requirement instead called for a radical new tank design rather than a derivative of an existing tank, such as the M4 Sherman. Whilst the war was ongoing, the US high command would begin to alter the requirements, mainly due to more powerful enemy vehicles showing up on the battlefield. One of the first changes done during the development was to introduce the new and innovative Torsion bar suspension made by the Buick Motor Division, who were part of General Motors. Later another change was to mount the British made QF 6-pounder gun which at the time would be in use on the British Churchill Mk III tanks. This would lead to one of the prototype vehicles to be made, which would be called T49 GMC. Tests proved to yield adequate results but still weren't up to standard, the US Army wanted the heavier 75 mm gun which at the time would be mainly used on the various Shermans in service. In the end this lead to the T67 GMC prototype, this got closer to the requirements but the US high command felt that more could be done. Finally, the US army decided to mount the 76 mm gun also in development for the Sherman onto the prototype, which now was known as the T70 GMC. Obviously changes to hull shape and turret had to be done, mainly to accommodate all the new requirements and armament set out by the US high command. After some refinement in the design, the US high command eventually approved the prototype for service and finally designated the vehicle as the M18 GMC. The vehicle started production in mid-1943, which went on until October 1944 with a grand total 2,507 units produced. They'd be extensively used, and would yield great results for the most part.

The story of the Italian M18, also known as the 'Semovente da 76/52', would officially start in the post-war period. The Italian army, and its armoured divisions for the most part ceased to exist, although the US and other allied countries would slowly begin to re-equip the Italian army with surplus equipment. Italy would also begin to restore some of their own WW2 era equipment which managed to survive the war into working order and promptly put them into service. As the early dawn of the Cold War was looming, and the Italian armed forces being fairly weak, it was decided that a series of rearmament programs begin. Luckily, the USA had a lot of surplus equipment that they did not need anymore and were willing to invest heavily in rearming the Italian army through the 'MAP' (Military Assistance Program). It was decided that Italy would receive a total of 130 M18 GMCs, which would all be finally delivered during July of 1952. The M18 Hellcats were renamed to 'Semovente da 76/52', re-painted, and as many Italian vehicles, had the side-skirts removed. In terms of service, the Semovente da 76/52 would be allocated to the 155th Artillery Regiment of the 5th Army Corps which garrisoned the regions of Veneto and Friuli Venezia Giulia near the Eastern border. They'd have a good reputation, and loosely followed standard Italian doctrine, which usually entails light vehicles with a good gun. Although they would have likely been in the front lines if a war between East and West ever broke out, they never saw combat action. During training, some Italian versions of the vehicle would install a machine gun, usually a Browning of some sort, onto the cannon. They'd be slowly be phased out for more modern designs who could be used as tank destroyers as the Cold War raged on.