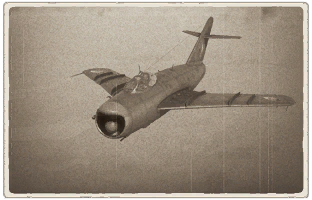 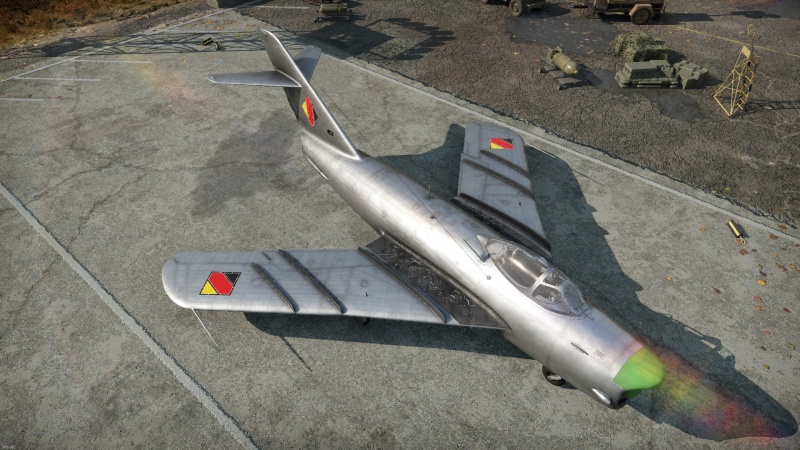 The ◊Lim-5P is a rank V German jet fighter with a battle rating of 9.0 (AB/RB/SB). It was introduced in Update "Danger Zone".

The Lim-5P (LIcencyjny Myśliwiec; Licensed Fighter) is a Polish built MiG-17PF in East-German service. Compared to the MiG-17 in the Soviet tech tree, the MiG-17PF/Lim-5P (Germany) features an airborne radar to search for aerial targets, an afterburning engine, and a uniform armament with three 23 mm cannons. While players of China's Shenyang F-5 will find the performance very similar thanks to the afterburner, the Lim-5P has 3 x 23 mm cannons and no missiles. Although the 23 mm guns have more ammo, players might need more practice to utilize this jet properly.

Players who own the Chinese (North Korean) F-5 will soon find themselves at home thanks to the exact same engine configuration- the VK-1F turbojet engine in this case; this sets Lim-5P apart from its Soviet counterparts. The overall handling though is very similar as well as they share the very same MiG-17 airframe aside from lacking the infamous N-37D cannon for higher damage; so most of the same traits shared on MiG-17 series are also a thing on Lim-5P. Be sure not to go too fast (> 900 km/h; the control surfaces lock up beyond this speed and increase the odds of an unwanted crash) and do make sure you finish off the target as fast as possible, bail from the battlefield before anything with better missiles come over; also beware of the below average roll rate, this could be a problem in necessary dogfights but the overall maneuverability is still sufficient to finish off damaged jets or jet bombers if needed. 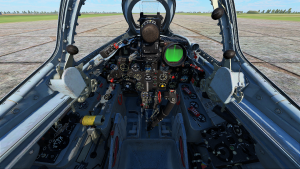 Unlike other MiG-17 variants, the Lim-5P has a unique cockpit with drastically improved visibility, a single artificial horizon reference line on both the collimator and the radar with separate search and track radars.

Like his Fresco cousins, aside from a 60 mm windshield, it has 16 mm steel plates behind the pilot seats and a 10 mm one by the intake; although it might not sound much to autocannons, but having this extra layer of protection is better than none at all for the pilot.

The Lim-5P (Germany) is armed with:

Different from its cousins in other trees, the Lim-5P replaced the nose-mounted 37 mm N-37D cannon for a third 23 mm NR-23 instead; perhaps there is some weight reduction in this case but it is also a decrease in overall firepower. For players who find the 23 mm cannon sometimes unreliable, they should spend time to practice its ballistics and make sure every shot counts; 100 rounds per gun is not as forgiving as NATO jets.

MiG-17 equivalent for the DDR line fighters is the best description for Lim-5P; it is the Polish licensed version of MiG-17PF and this also marks its identity as a all-weather interceptor with a RP-5 radar. It might not be very reliable due to its electronics, but 8 km detection range at higher altitude does also gives players an edge on spotting enemies beforehand; this is especially true in SB since who spot first really matters in this case (but do make sure the target is indeed an enemy). Another feature of Lim-5P is the VK-1F afterburner turbojet engine, players of Shenyang F-5 will soon find themselves at home as this further boost its capability to chase down enemies with lower energy or altitude with ease, sometimes even handling supersonic jets in dire.

However, players will also find the similar flaws from his cousins: control surfaces lock up and subpar roll rate at higher speeds. Be sure to check the speeds before chasing down enemies or players will meet their demise quickly; do beware of jets with missiles when doing dogfights, since the heat from the afterburner is high, turn it off for better odds to dodge the missile. Meanwhile, it has 3 x 23 mm NR-23 cannons instead of the conventional 2 x 23 mm and a 37 mm N-37D config for lighter weight during interception missions and also higher ammo count; to some players it means more rounds to sparse, while some consider it as a big nerf from his cousins since the 23 mm rounds don't fly as straight as their NATO counterparts and some might prefer having a 37 mm for an instant-kill. Trigger discipline is still essential for this jet (300 rounds in total) to make sure the best efficiency can be achieved- it is still an autocannon, after all.

The MiG-17 (NATO: Fresco) has been the weapon of choice for Warsaw Pact or allies of Soviet Union and has already been exported to tens of countries throughout the 1950s; while the development for supersonic jets were still in progress, some countries with better heavy industry capabilities decided to get the license for building them domestically. Aside from the other wide-spread build of Shenyang J-5 (歼-5), the other licensed build was the WSK "PZL-Mielec" Lim-5 and 6 from Poland.

The licensing contract was signed in 1955 as the replacement of the earlier Lim-2 (MiG-15), Lim-5P was the all-weather variant of MiG-17PF with revisions on armaments and engine, as well as a RP-5 radar for target acquisition. By the end of 1960, 129 of them were built; some of them were also converted into Lim-6M and -6MR variant as attacker/recon aircraft for Polish Air Force.

The LSK (Luftstreitkräfte; East German Airforce) acquired 40-48 of MiG-17PF/Lim-5P from both USSR and Poland as one of the composition of their jet fighter/attacker fleets. They didn't join any combats and been phrased out by newer jets from USSR between 1970 to 1973, either being scrapped or been transferred to Guinea-Bissau in the 1980s.[1]