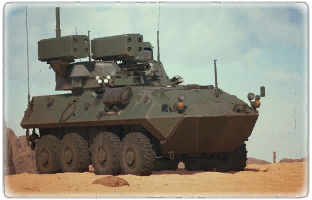 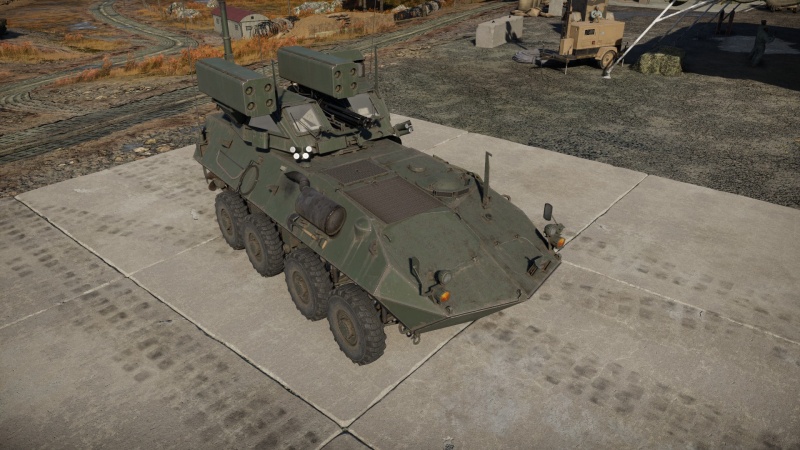 The LAV-AD's mobility is rather superb. As a wheeled vehicle, it has good speed on roads. Despite being similar in appearance and having a weaker engine than the M1128, the LAV-AD accelerates much faster due to its lighter weight, resulting in a higher power-to-weight ratio, and it also has a slightly faster reverse speed. The engine is also relatively quiet, allowing for stealthy movements and ambushes.

The main armament of the LAV-AD is the 25 mm GAU-12U rotary autocannon. It functions similarly to the 20 mm M168 Vulcan found on the M163 earlier on in the tech tree, but with a reduced ammo capacity of only 1,000 rounds total (500 ready, 500 reserve instead of 1,100 ready, 1,100 reserve) and fire rate (1,800 rpm instead of 3,000 rpm) due to the limited room in the vehicle and larger calibre ammunition. The gun is also fully stabilized, with handling akin to that of the HSTV-L; slower than the M163 and M247 Sergeant York but still fast enough to react to most aerial targets at close range, particularly helicopters and slow, low-flying jets. Like most other AAs, it comes with a Default, AP, and HE belt. The Default belt has a 1:1 AP to HE ratio and is the only belt the vehicle has access to when stock. The HE belt has a 3:1 HE to AP ratio while the AP belt has a 3:1 AP to HE ratio. The former is more effective against aircraft while the latter is more effective against armoured vehicles. The AP round is the same across all belts, and can penetrate 91 mm of armour at point blank range. Combined with the relatively high fire rate, it can easily destroy barrels, tracks, and machine guns with ease as well as being able to shred light vehicles.

The LAV-AD also has access to Hydra 70 M247 rockets with a researchable modification. This modification gives the vehicle an additional weapon set-up, replacing the Stinger pod above the main gun with a Hydra 70 rocket pod with 19 rockets, similar to those found on AH-1 Cobras and AH-64 Apaches. The Hydras are fired as a secondary weapon.

In battles, the player can either use the LAV-AD as an AA or in an anti-tank role. By using the LAV's fast speed, the player can easily reach deep into enemy territory where enemies are less vigilant compared to when they're near the frontline. The player can use this advantage by either hiding and waiting for planes to be distracted on friendly tanks and shooting them down or used to attack unsuspecting SPAAs and IFVs/light tanks from mid range and then closing up close to killing MBTs, having the rocket pod unlocked makes quick work of enemy armour if you can get on their flanks additionally the LAV can be used a very good bait against the enemy to lure their concentration while you teammates may shoot the said tank.

The LAV's stingers are decent but they are easy to notice and evade with their smoke trail, leading to the use of 2-3 Stingers to get a hit. While the gun has a fast rate of fire, it has a terrible drop over distance, meaning it is a bit harder to hit but you have a lead indicator upon locking on the aircraft. The best option is to lure the plane into thinking it is safe and engage it with the 25 mm gun under 3 km range to minimize the chance of survival and launch a Stinger at the plane if you did not fully kill it with the 25 mm.

The LAV is mobile, outpacing most light tanks at its BR, and can use this to its advantage by reaching the enemy territory and flanking SPAAs and light tanks. Against MBTs, the LAV's 25 mm can penetrate the side armour of most MBTs, but the post-penetration damage is very weak. However, against Soviet armour, the LAVs struggles to penetrate the side armour. In such cases, bringing the 70 mm Hydra pod is a good choice. The LAV-AD can knock out most MBTs with 2 HEAT grenades. Combined with its good mobility, the 70 mm Hydra make the LAV a beast if given a solid flank.

In the LAV-AD, anything above a 12.7 mm calibre poses a big threat to the player. In such cases, it is recommended to knock out the enemy vehicle with autocannons first as they can shred the LAV, Large calibre tank shells can overpenetrate the tank without detonating and therefore do minimal damage.

Development of the LAV-AD began in 1987 after a contract was signed with both the FMC Corporation and General Electric to design a SPAA variant for the LAV-25 for the USMC. Both companies began developing a system based on the USMC requirements that it had to be armed with a 25 mm cannon and possess provisions for mounting Stinger missiles and Hydra-70 rockets. While the FMC company opted to outfit their design with the same M242 cannon used on the base model of the LAV-25, General Electric decided to go for the GAU-12 'Equalizer' Gatling style rotary cannon.

Having reviewed both prototypes, the USMC decided to procure General Electric's design, placing an initial order for 125 vehicles to be produced. By 1996, the LAV-AD had formally been adopted into service. Despite the initial plans to produce over 100 vehicles, only 17 were actually manufactured due to funding issues. In 1998, the final unit was delivered to the USMC and further development of the vehicle was discontinued due to high maintenance costs. Among other operations, the LAV-AD was used in combat action in Iraq.