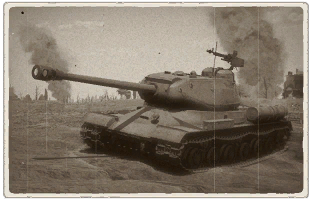 It is almost identical to the Soviet IS-2 (1944) except for the lack of spaced armour on the turret.

The armour of the IS-2 mod.1944 (China) is fitting for a heavy tank, with enough thickness to ward off most incoming shots. However, there are lots of weak points present that enemy guns can readily penetrate, namely the lower glacis and the turret front, the latter which presents only 100 mm of armour if the incoming shell hits at a 0 degree impact angle. The side armour is thick enough to utilize side-scraping techniques with the IS-2 mod.1944 (China), but don't expect much if the enemy is able to attack at a small impact angle.

The vehicle overall however is well protected against aircraft armaments strafing the IS-2 mod.1944 (China), but keep an eye out for large-calibre aircraft cannons as well as the usual aircraft ordnance such as bombs and rockets.

The slow mobility and handling does translate to a less rocky ride, and so the gun does not move too harshly when aiming down the sights while moving, even when coming to a stop. While this gun handling is not sufficient enough to fire while moving, it does allow a player to keep the enemy in sight to easily lay the gun onto once the IS-2 mod.1944 (China) stops for a stable shot. 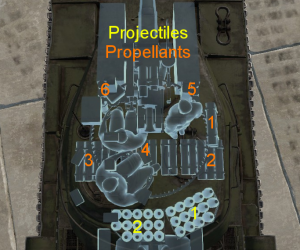 The machine gun armament of the IS-2 mod.1944 (China) is vastly improved from the previous iteration due to the presence of a 12.7 mm DShK machine gun on a pintle-mount. This allows not only a better ability to defend against aircraft, but as an alternative offensive capability to the slow-firing 122 mm gun. Penetrating more than 20 mm of armour from at maximum 500 m, the DShK is great to attack lightly armoured vehicles. The coaxial gun in this case has little use aside from an harassing tool against an armoured enemy or foliage clearing device against fences that may be in the way. Still, these two machine guns should not be neglected from the arsenal of the IS-2 mod.1944 (China).

The IS-2 '44 is a definite improvement on its predecessor, the IS-2. Most notably the frontal armour now features a slope, which can bounce or outright block some rounds. This iteration of the IS-2 also features a roof-mounted machine gun that can be used to attack aircraft without moving your turret (by using weapon selection keys set in the controls). Otherwise, the IS-2 '44 is identical to the IS-2.

If you are to apply bushes onto the IS-2 1944, consider putting most of them on the curved sides next to the upper glacis. You can even leave the upper glacis exposed, as it is very tough. This is because that quite some opponents will automatically target the curved armour, knowing that area is a common weak spot when the IS is angling. By covering up these curves, it will cause some confusion and delay the enemy's reaction & aiming time, as they now cannot directly see where your curved armour is, gifting you a few precious seconds before they open fire. For any leftover bushes, the turret front and the lower front plate are also good spots to put them on.

You will see Tiger II (H) and Panther II a lot, as well as much more heavily armoured vehicles such as the Jagdtiger, the Ferdinand, the T32 and the T95 (in an up-tier). These tanks are near-impossible to penetrate frontally, so you will have to try to flank them. Otherwise, the gameplay remains the same as with the previous IS-2.

Overall, you shouldn't over-extend into enemy territory because your reload is still slow; you should play off your teammates and use your great reverse speed to get out of line of sight as soon as you have shot, or have been shot; you should have fun with the 122 mm gun that blows roofs off most enemies you penetrate. Flanking is best done in Arcade, while in Realistic you're better of setting up ambushes at a medium distance away from main pathways.

Close quarters combat proves even more deadly in Arcade Battles because all opposing vehicles will be able to easily overrun a single IS-2, especially after it has shot and is now waiting through it long reloads (> 20s). Hence why it's advised to use your improved reverse speed to quickly disengage after shooting and retreating towards your teammates, who will likely be able to return fire. If the map forces you to fight in close quarters, attempt to get into a position where your teammates can cover your sides, while you can face forwards and clear the road. If the map allows, you can try taking 5 rounds of ammunition and camp at a capture point (usually one that's given to your team) to snipe all enemies that enter your line of sight while reducing your chances of blowing up at the first incoming shot.

Due to generally increased map size in Realistic, you will have to get comfortable with the bullet drop. Now, the IS-2 performs decently well at longer ranges, but it will cost you a lot if you miss or don't penetrate, because the reload is so long. Often, you will need to rely on the rangefinder, the teammates or map knowledge to gauge how high you need to shoot, so it might be a great idea to take out another vehicle first (such as the T-34-85 Gai or Type 63-I) remember the distance and then take the IS-2 out. However, on larger maps, it is generally a better idea to take out other vehicles.

A more reliable strategy for the IS-2 is to camp nearby an objective and pick off any enemies who pose a threat. Just make sure to find a flat spot with cover, because your poor gun depression and long reload will be your death in hilly or open areas. It's also a good idea to target heavy enemies, because they are easier to hit, and also will likely pose a larger threat to your general team (e.g. the Ferdinand, the Ho-Ri or the Tiger II (H) ).

Although classified as a heavy tank, the IS-2's armour will no longer hold up to its more common and heavier opponents of its battle rating. Compared with other vehicles such as the new German Tiger II, American heavy T-series tanks; most of which can easily deflect even the most powerful shots of the IS-2 unless targeted specifically and known weak-spots. Because of this, it is recommended to always travel and fight in groups of two or more vehicles. The slow and difficult in the manoeuvring of the vehicle (especially in confined spaces) will more than once place the IS-2 in significant danger. It is recommended to field the IS-2 into a fire-support role, peeking over the shoulder of friendly, more heavier vehicles and firing a shot against the opposition in tandem.

Another significant note of this vehicle is the IS-2's considerably fast reverse rate, the highest of its rank and battle rating for the nation's faction inherited from its IS-1 predecessor, topping at 17 km/h. During situations where engagement is expected, an unorthodox strategy can be utilized where the operator of the IS-2 tank re-positions the vehicle 90 degrees and drives in reverse with the rear facing towards the enemy. By driving in reverse this way, the engine blocks make a crude yet somewhat effective shield to protect the more delicate crew members. As the fuel tanks are mostly stored at the front on the left and right side of the driver's station, the risk of fire and fuel-tank explosion is reduced significantly (but not completely eliminated) and thus, the tank is able to resist even the most powerful of shots. Be aware that more experienced players may attempt to instead fire at the more exposed turret of the IS tank and instantly knocking out the crew with a common APHE penetrating shell in this way.

In regards to shells, the D-25T cannon is also equipped with powerful High-explosive (HE) shells which should not go ignored. Firing a HE shell with precise aim directly underneath the chassis of enemy vehicles were the armour, like on the top of the vehicle if thinnest, can cripple or instantly destroy said enemy vehicles. In rare instances, the HE shell of the D-25T is so powerful to the point two or more medium or heavy tanks close to each other can be destroyed with a single exploding HE Shell. Alternatively, the powerful armour-piercing capability of the D-25T cannon's APHE rounds has also been documented to pierce two or three light-armoured targets without exploding.

These are common vehicles you will see in this tank.

The People's Republic of China (PRC) received a total of 60 IS-2 heavy tanks from the Soviet Union in 1950 and another 22 in 1954, for a total of 82. The Chinese IS-2 heavy tanks saw service in the Korean War from 1950 to 1951, equipping four or more tank companies with 5 IS-2s each according to American intelligence. The IS-2 was removed from active service with the PLA by the end of the 1950s.