How to add Ammo Rack information to vehicle pages

Users are responsible for ensuring that the data and visual imagery presented are accurate and of a sufficient quality that the content is understood by a casual user on the War Thunder Wiki. A user must be able to obtain all necessary information of a ground vehicle's ammo rack data from the ground vehicle's wiki page without having to open another page.

Familiarization Around Counting of Ammunition Racks 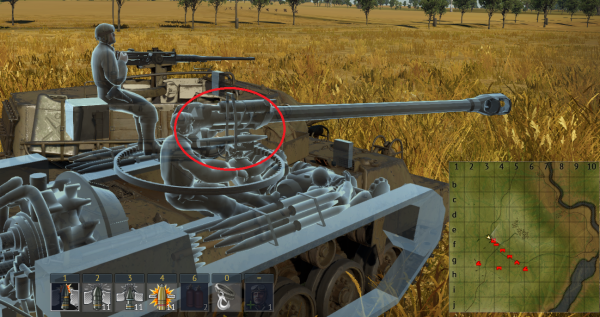 An M18 in test-drive during an ammo rack test. Testing for ammo rack #1 (to the right of the gun breech) which shows as half-depleted when the M18 has 38 shells, but we should only count the "empty" data only when the entire rack has been expended. 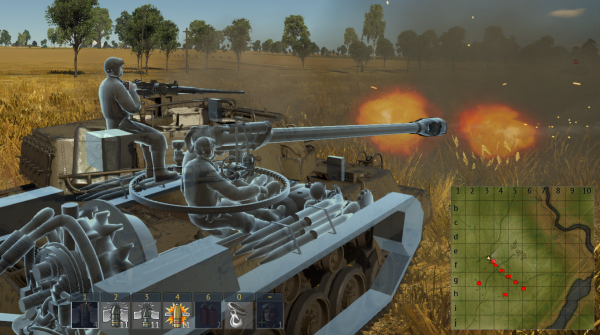 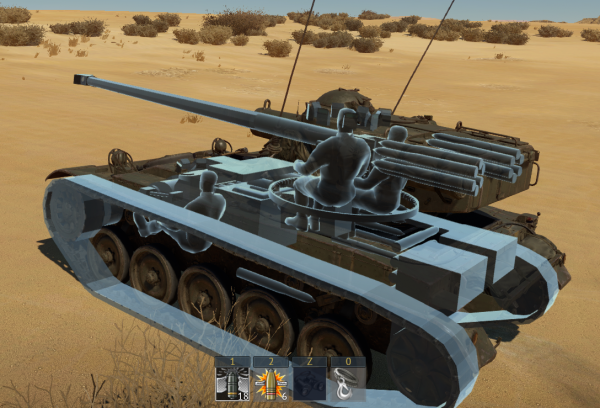 This AMX-13 provides a good example of how first-order ammunition racks need to be treated differently. This tank has been loaded into battle with the ammunition setting 24 (+12) and so it spawned in combat with 12 less shells. If fired in combat, the 12 shells would be depleted from the ready racks in the turret. However, since the AMX-13 was pre-loaded with 12 less shells instead, the shells from the other racks are instead transferred into the ready rack to fully load them, explaining the empty spaces in the AMX-13 hull where the shells would be.

To create the visual identification, you do not need some fancy photo editing program. All you need is to load paint or something which comes with your PC for free to do this.

Starting from the in-game hangar menu, the default view should look something like this image:

Currently, the vehicle will not show the interior view, which means ammo racks will not be viewable.

To enter X-ray view, use the control panel on the left side of the screen. On the control panel screen that provides vehicle details, the "X-Ray" button should be visible on the lower right side. Once the X-ray button has been pressed, the vehicle will now look like this: 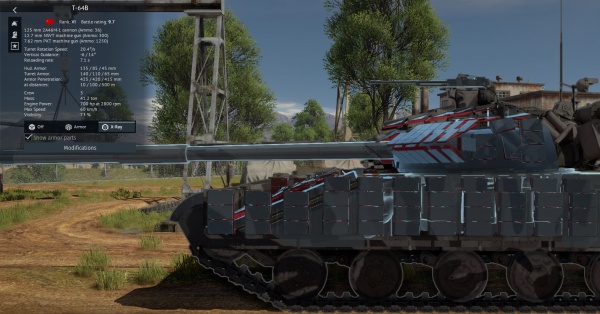 However, the X-ray image still looks extremely cluttered with internal tank armour and parts showing up. This will be a common view in Rank VI and later vehicles due to the composite armour constructions showing up in the X-ray view. To remove some of these obstacles, the checkmark below the "X-Ray" button labelled "Show armor parts" need to be checked OFF. The resulting image should be like this: 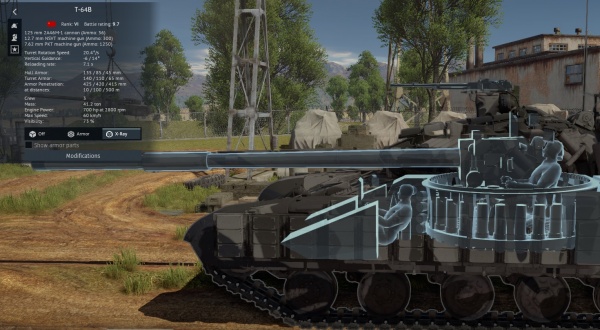 You can now see the difference, with and without that setting ticked - The vehicle is now cleaner and the ammo racks are now easier to see.

The image should look, something like this at the end. It's important to make sure the ammo racks can clearly be seen for the viewer of the image. 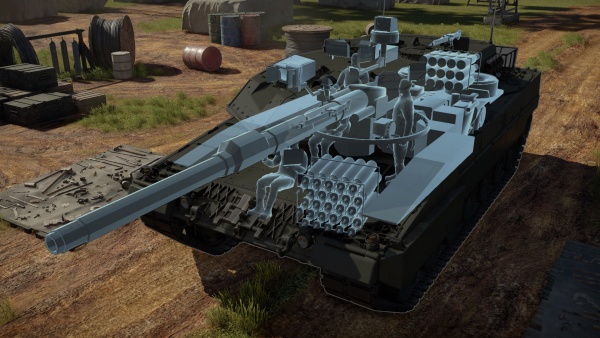 Taking the screenshot with Nvidia Ansel

The default keys to activate Nvidia Ansel in the hangar is Alt + F2. This mode will allow more customization in the angle and view of the vehicle for a screenshot. Once the right shot and options are selected, press the green "Snap" button on the Nvidia Ansel control panel to produce a screenshot.

Editing the screenshot(s) in a photo editing application:

All that needs to be done, is simply load the screenshot in a photo editing program, Photoshop, Paint - whatever program you have. To highlight the ammo racks.

Adding a box over the ammo rack: (Image A1) 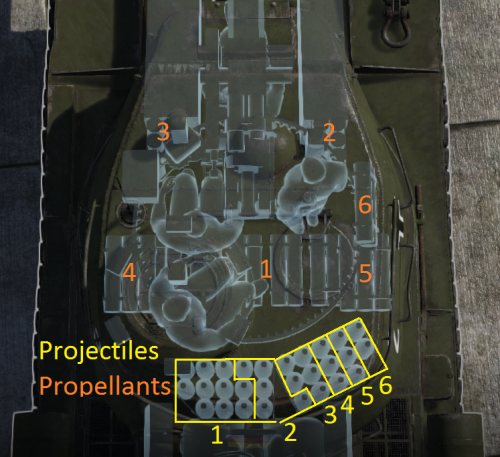 Adding a number over the ammo rack: (Image A2) 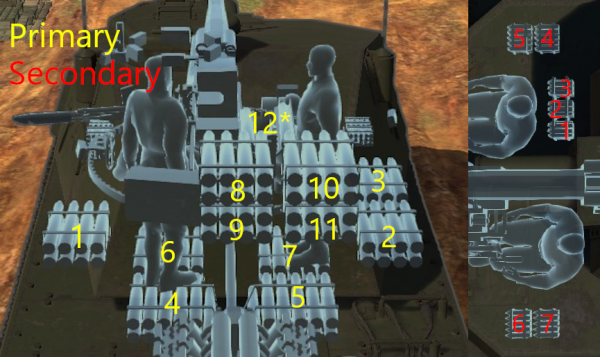 Saving the images as a .png

This step is dependent on the image-editing software used for the previous step. Use whichever function is needed to export the file into a .png format for use on the Wiki.

In Paint, to export the edited file as a .png, go to the File button on the top-left corner of the software's window and press it for a drop-down menu. Go over to the Save As function and hover the mouse over it to open a menu to the right. Click the PNG picture in the menu and the program will allow the image to be saved in the .png format.

How to upload the image on the wiki: (Image U1) 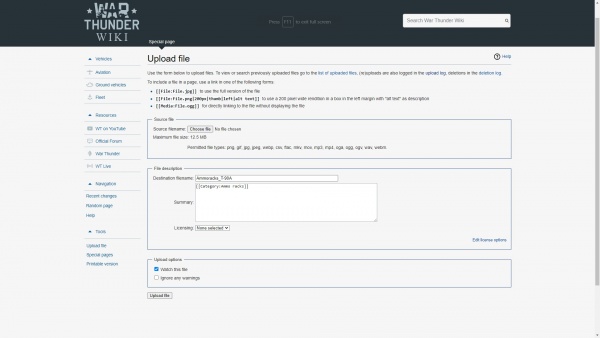 To upload an image on the War Thunder: Wiki - Make sure you are logged in, go to the left hand side bar and click "Tools" - It will expand and show a button called upload. Once this button has been clicked, it will load the above for you to upload the image.

How to Insert the image onto the page:

The page should have this line of text which automatically inserts the image onto the correct page - that is why you have to follow our naming convention. If the page is a barebone page, copy this text word for word and insert this line of text under the Ammo rack header:

To do this: click "Edit source" on the top right of the Wiki page. Scroll down the towards the ===Ammo racks=== section and drop the code under it. Press the blue "Save changes" on the bottom of the source edit page and then the edit will be saved. However, the edit will require a Wiki Moderator's approval before it is publicised, so do not be alarmed it the image does not appear immediately afterwards.

If the page is a very new page and it is missing all tables and everything relating to ammo racks go to HERE, press edit source and copy everything listed under this header and paste it in.