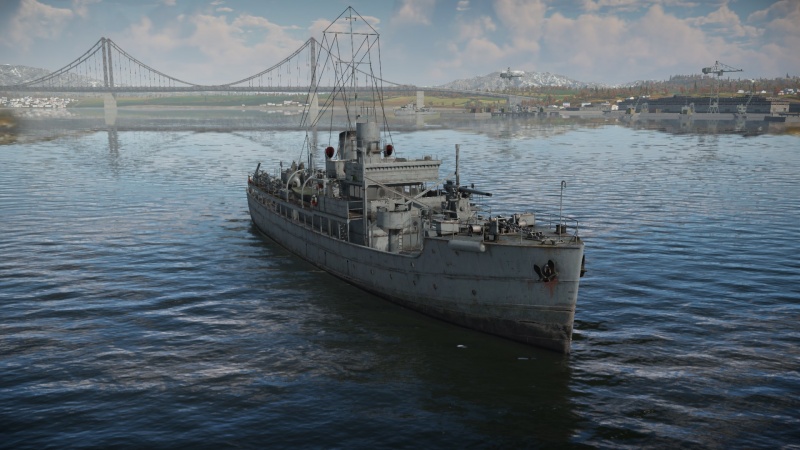 The Isles-class, HMS Liscomb (T-285) is a rank II British sub-chaser with a battle rating of 1.7 (AB/RB/SB). It was introduced in Update 1.83 "Masters of the Sea" as part of the British fleet Closed Beta Test.

No ammunition choices are available for this gun. Although not directly stated in-game, the guns fire one tracer round every other round, so they most likely use the standard Default ammunition choice of the 7.72 mm Lewis 1916 machine gun which has the following composition and penetration statistics: 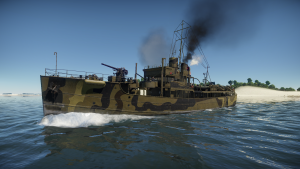 Lacking in speed, Isles class (T-285) is best used as a support vessel. Stay at the back of the rest of the team and use the 4 in QF Mark V cannon to take out any tough enemies the team may have trouble dealing with. Priority targets include other large vessels such as sub-chasers, German barges, and Soviet armoured guns boats, since, in one way or another, all of these possess high survivability and powerful armaments, making them difficult for smaller boats to effectively engage. In particular, prioritize Soviet armoured gun boats. These are some of the only boats in rank I and rank II with any substantial armour, and the 4 in QF Mark V cannon, with its SAP round, is one of the only guns that can reliably penetrate them when angled. If possible, try to aim for their ammunition storages located below their guns at the waterline. This will almost always result in a knock-out. Otherwise, target the heavily-armoured "citadel" at the centre of the boats as, chances are, the less-armoured bow and stern compartments may already be destroyed. For larger vessels such as sub-chasers, use the shrapnel round; for all other targets, the HE round will suffice. 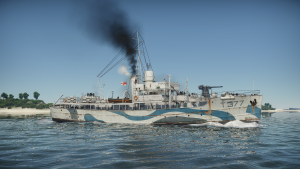 The Isles-class, also known as the Western Isles-class, was a class of 197 Royal Navy naval trawlers built between 1939 and 1945. The Isles-class actually comprised of four separate classes of trawlers: the Tree-class, the Dance-class, the Shakespearean-class, and the Isles-class. While the four classes of trawlers are separate, their overall designs were very similar. All four had a length overall of 164 ft, a beam of 27 ft 8 in, and a deep load displacement of 11 ft 1 in. They were all powered by a single shaft vertical triple expansion boiler producing 850 bhp, giving them a top speed of 12.25 knots. Royal Navy trawlers used for minesweeping and convoy escort — which includes the Tree-class, the Shakespearean-class, and the Isles-class — were armed with the standard armament consisting of a single 3-inch QF 12-pdr 12 cwt cannon on the bow, as well as several Oerlikon 20 mm cannons and 30 depth charges. Those used for anti-submarine operations — in this case, only the Dance-class — were additionally given ASDIC equipment and a 4-inch/45 BL Mk IX cannon in place of the 12-pdr cannon.