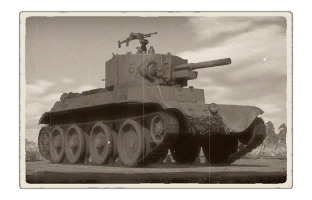 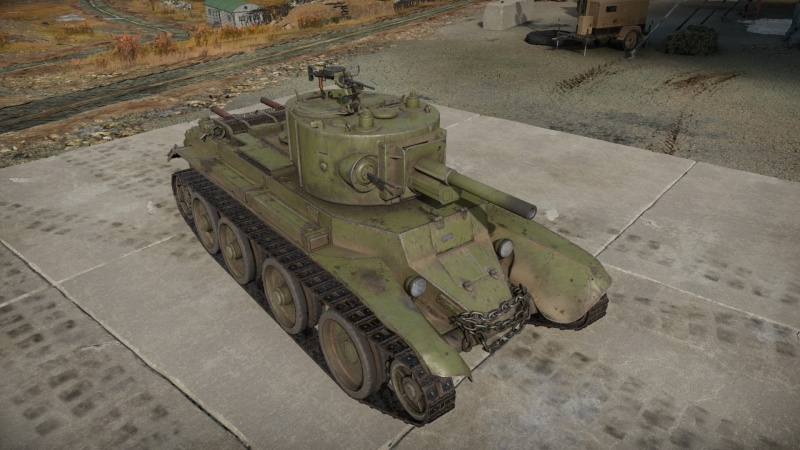 The BT-7A (F-32) is a premium gift rank II Soviet light tank with a battle rating of 3.7 (AB/RB/SB). It was introduced during Update 1.89 "Imperial Navy" as one of the rewards for Operation H.E.A.T. It uses the same chassis as the BT-7 and as such, possesses the same armour, engine and crew layout but adds a new turret fitted with the 76 mm F-32 gun.

Like the BT-7 before it, it is very fast while having light armour, which at its BR can be penetrated by virtually all vehicles, meaning it must rely on stealth and speed even more than its predecessor. It comes armed with the much more powerful 76 mm F-32 cannon, which has higher penetration and explosive mass, allowing it to easily knock out larger tanks from the side with a single shot. It also comes with a pintle-mounted light machine gun, a rarity among early Soviet tanks, allowing it slightly more AA firepower.

Being lightly armoured, the BT-7A (F-32) is very vulnerable to nearby ammo rack detonations and bomb blasts.

As a light tank, the BT-7A (F-32) is very agile and has a very high top speed. Due to its high HP ratio, the acceleration is outstanding: 59 km/h in about 6 seconds off-road. The brakes are powerful and will make it skid rather than slow down when travelling at maximum speed. The reverse speed is good (-11 km/h): it will get you out of a dangerous situation quickly. While the BT-7A (F-32) lacks neutral steering, the turning speed on the spot is still good (8 km/h). It reaches 20 km/h when fording, 27 km/h when driving uphill with some speed built-up but only 13 km/h uphill from a stop. The narrow tracks will grant you a decent mobility on hard terrain (solid ground, roads) but poor mobility on soft terrain (mud, snow, sand), especially when changing direction as the tracks are long and close to one another. Light obstacles (fences and bushes) are not a problem but medium to large obstacles (posts, trees, concrete blocks and parked vehicles) will reduce your mobility: avoid them.

The F-32 gun offers a good penetration power at its battle rating. Its below-average muzzle velocity still allows for pretty flat firing trajectories. The accuracy drop is noticeable from a 1,000 m distance and becomes a handicap over 1,300 m. The rotation speed of the turret is rather slow but average compared to other tanks at the same rank or battle rating. The elevation angle of the gun is important, allowing you to fire at an elevated position but the depression angle is poor, making it impossible to fire from behind a ridge. Lacking a stabilizer, the tank can't reliably fire on the move. The reload time of the gun is rather long but in line with other tanks equipped with a 76 mm cannon at the same BR. The gun recoil is average for a Soviet vehicle and not important enough to throw your gun off target after firing. 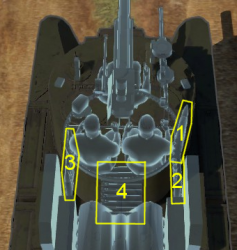 The BT-7A (F-32) is a light tank and should be played as such: flank the opposing forces, surprise the enemy, take a shot before they can react and get to cover before other enemy tanks come to help and engage your light tank.

The BT-7 (F32) is a modification of the BT-7 Artillery model sometimes called BT-7A. The artillery model took the design of the T-26-4 turret fitted with a KT-28 short-barrelled howitzer and mounted a 76 mm (3 in) ST short-barrelled howitzer. Due to the extra weight of the turret, the BT lost its ability to drive on the road wheels. 155 BT-7A models were created, 11 converted into command versions and a few were tested with a bigger 76 mm gun, the F-32 gun designed by famous Soviet weapon designer, Vasily Grabin.

The pre-war Soviet BT-7s stood out as reliable, manoeuvrable vehicles that worked especially well when attacking in conjunction with infantry. However, the 45 mm cannon had insufficient destructive potential for combat with serious enemy fortifications. In 1939 two experimental BT-7 models were tested with a more powerful 76 mm cannon: the L-11, which was then installed on early KV-1s, and the F-32, the precursor to the gun mounted on the first T-34s. The L-11 turned out to be too large to be installed on the BT-7's small turret, but the F-32 not only fit well on the tank's turret, but also beat the competing gun in a number of tactical and technical characteristics. The committee unequivocally recommended the BT-7 (F-32) modification for serial production, but, due to a series of factors, the tank never saw mass production, and only the experimental model was ever produced.