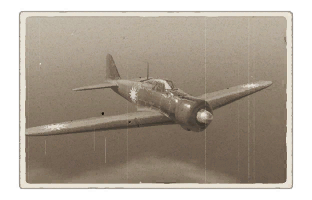 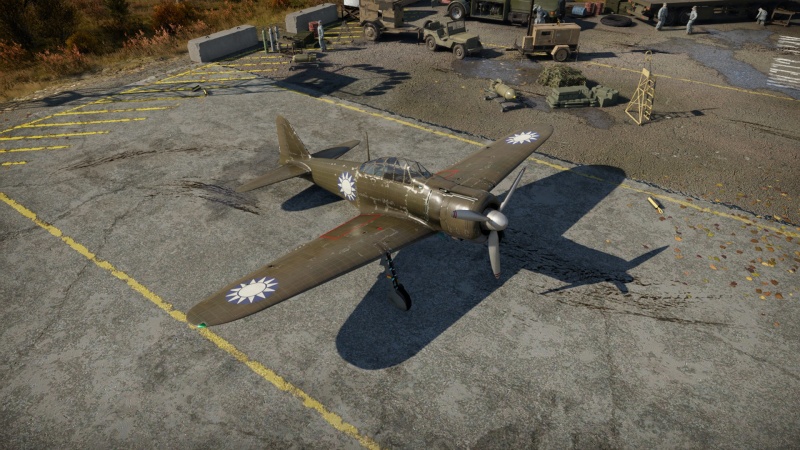 This aircraft is a copy of the A6M2 in the Japanese tech tree: it has really good turning and manoeuvrability, is able to accelerate fast, has a good climb rate and is known for being the best turn-fighter at its battle rating with the cost of being very weak in terms of armour protection against enemy fire. This aircraft also has a slow top speed, but is still very competitive with other fighters at its BR.

One thing many players note when fighting the Zero is its immense manoeuvrability and turn rate. It is incredibly nimble and has an amazing climb rate, which allows you to run literal rings around many opponents. Even fighters renowned for manoeuvrability, like the mighty Spitfire, will think twice before engaging in a turn fight with the Zero. The Zero's lightly loaded, high-lift wing and low weight make it a dream to fly at speeds below 400 km/h, with an ability to execute wild gyrations and zoom climbs at the whim of the pilot. However, the Zero is hard to handle as it approaches speeds of 480 km/h.

The best tactic to use in this aircraft is to sneak up behind your enemies and use your excellent turn rate to your advantage, something that most other fighters don't have at the BR. The most dangerous enemies in this aircraft come from above, Boom-and-Zoomers will rain fire from above if you are not careful.

Force an enemy pilot into a dogfight at 370-400 km/h and below 6,000 m. At this speed and altitude, no enemy fighter can out-manoeuvre or out-climb you. Jump on cruising enemy aircraft from above. Fasten onto the tail of the bandit, use your superior manoeuvrability to match his evasive moves, and put enough rounds into him to bring him down. Use your machine guns first to "bore-sight" the enemy - once you get hits on him, finish him off with your cannons. Below 480 km/h you can fling the Zero all over the sky to get on an enemy's tail or to shake off all but the most determined attacker. Climb away from most enemy aircraft, hanging on your prop in a near-vertical climb. Manoeuvres like the Immelmann are easy, and heavier fighters can't stay with you. The Zero rolls faster to the left than to the right. Roll left to tighten your turn and get onto the enemy's six. Don't dive away from attackers - your plane doesn't have the power or weight to out-run most fighters. To exploit your plane's best performance, force the enemy lower and slow down the pace of the engagement.

Mastering trigger control is crucial for the A6M2, as each of its Type 99 Model 1 cannons only has a 60-round drum that runs out very fast with a long burst which is commonly done by inexperienced pilots. A good way to practice trigger discipline is to fire short bursts for no more than 3 seconds each time. This can be very effective as a short burst of the 20 mm is generally enough to cripple if not destroy a target.

The A6M Zero is known for its tendency to catch fire when hit, and they usually do so in-game. Weapons such as the M2HB can easily set the Zero's fuel tanks aflame. However if you are on fire, do not panic: immediately press "I" to turn off the engine and wait for a few seconds. The fire might go out quickly. As soon as the fire is put out, press "I" again to turn the engine back on. Depending on the damage and the situation, the Zero may still remain competitive for a fight after a fire.

The Chinese A6M2 will be very easy to handle for those with experiences on Japanese A6Ms. In Simulator mode, the A6M2 is quite a decent plane thanks to its great flight characteristics, but the lacklustre armament limits its beginner-friendliness.

Just like in Realistic Battle, the A6M2 in Simulator is a great turn-fighter, being able to pull off tight manoeuvres at any speeds that would otherwise stall other aircraft. Low-speed control is forgiving: it retains a great turn rate and handling at <300 km/h, making it easy to land. It also has decent acceleration and climb rate. The roll rate is mediocre but still usable. The dive speed, as one would expect, is not fast at all, so do not try to out-dive any monoplane fighter except I-16s. Something absent in Realistic mode is the responsiveness/sensibility of the aircraft, and the Zero shines at it since the plane feels highly stable and smooth in level flight as well as manoeuvres, allowing the player to pull a lead accurately which is an aspect that quite some turnfighters lack (they are usually too sensitive on the stick).

The A6M2's armament, however, is perhaps its biggest setback especially for beginners. The main disadvantage is the extremely limited ammo count for the 20 mm cannons, at only 60 rounds per gun. With a fire rate of 516 rounds per minute, the cannons will run out of ammo after around 4 bursts which puts a heavy restrain on its battle. But if the shells hit, they destroy. Monoplanes will get critically damaged by 1-3 hits from the cannons, while larger planes require more hits. The cannons' low muzzle velocity is also a disadvantage as it leads to a curvy trajectory which makes distant shots much harder. Another critical disadvantage is the low-mounted gunsight. Being very close to the nose it leaves very little room for the pilot to see below the engine cowling which makes leading very awkward. The numerous canopy frames are also an obstruction preventing the player from quickly locating enemies. The rear view however is quite clear, with all the stabilisers visible.

The Zero's survivability is just as bad in Simulator. The absence of any armour and self-sealing fuel tank means that it cannot take any hits at all, even rifle-calibre bullets can damage its fragile body. Another thing to notice is to hear for an unusual, wind-like noise when you get hit. That is the sound of the plane catching fire. Since you only have the pilot's first person view as opposed to Realistic's third person view which allows you to see a fire straightaway, you must be aware of a fire by hearing or constantly looking around. Common places to catch fire are the wingroots and the back half of the fuselage. If the A6M2 is on fire, immediately turn the engine off and pray. The fire can actually go out but it will leave some fatal damage to the plane.

Consider bringing the least amount of fuel as your cannons will run out quickly anyways meaning you will need to frequently head back to rearm which also refuels you, rendering more fuel pointless. Also consider setting separate keybinds for firing the MG and cannons to save cannon ammo, and vertical head movement to get a bit more view below the nose. As the plane glides down the runway, slightly tilt the control stick to the right to counter the torque to the right. The Chinese A6M2 is painted in a dark brown paint job which works great in evening battles and maps with brown/dark green ground. The plane can usually blend into such dark backgrounds when flying lower than the foes, making it harder for them to spot you. But if the map is bright or if you are above the opponents you will be quite visible. Once you see a target, it is recommended to chase using lead pursuit to take a shortcut because most planes will be faster than the Zero (e.g. Bf 109 E/F, Yak-1, He-100). If they are unaware of a tailer, try sneaking up behind them, get close until their wingtips fill up your windscreen, and open fire. Trigger control is crucial, so do not burst for more than 1.5 seconds each time you fire the cannons.

For the sake of a sneaky surprise attack from behind you can fire all weapons at once, but generally it is a good practice to shoot the MG first to get an accurate lead, then as the bullet start hitting fire the cannons. A common scenario you might encounter is a turnfight. The opponent tries to turn, and you cut inside their turn. Now due to the awful over-the-nose visibility, the target will disappear below the nose when you lead which is not a good thing. A tactic to avoid this is to set up a deflection shot. Pull a hard turn using a combination of ailerons, elevators and rudder to place the target at your side window (opposite side as to where you two are turning), then bank slightly towards the target. Now it should be approaching your line of flight from the side, and a perfectly lined-up deflection shot will result in the target passing right in front of your gunsight without being obstructed and all you have to do is to fire a short burst. Note that all these will happen within ~10 seconds thus extensive practising, quick reaction and precise controls must be in place to create a good deflection shot.

Unfortunately, missions like "destroy enemy bombers/attackers" and ground pounding is not very suitable for the A6M2 mainly due to its severely limited cannon ammunition and nonexistent protection. Although typical bombers/attackers like Ju-88, Ju-87, B-34, etc are vulnerable in Realistic battles, they are way more formidable in Simulator as the control makes it harder for the offensive side to lead accurately, giving their gunners chances to deal critical damage. Their fuselage can also eat up quite a few cannon hits. The Zero can perform CAS to a limited extend by using its bombs and MG against tanks, trucks, AAA, etc. Check your surroundings constantly.

Main article: History of the A6M2

After the first encounters with the Zeke in September 1940, Japanese forces proved their superiority over the poorly equipped ROCAF with only biplanes and very few monoplanes imported from US, making Zeke invincible over the Chinese skies up until 1942.

In spite of the supremacy of the Japanese aviation over the Chinese forces, KMT forces still got their hand on two A6M2b Zekes at Leizhou Peninsula, Guangdong in 26 November, 1941, the plane V-172, sn. Mitsubishi 3372, manufactured in 21 October, 1941, belonged to the Tainan Air Group (Tainan Kaigun Kokutai 台南海軍航空隊) and was piloted by staff sergeant Inoue Shichigosanzo (井上七五三造; fate unknown)[1] and V-174 by sergent Takaaki Shimoto(下東孝明; fate unknown); they were then dismantled and transported to Liuzhou (now in Guangxi) for further studies and ROCAF decals were painted onto V-172, it was then evaluated by the AVG-the Flying Tigers where Claire Lee Chennault was in command, that was in fact the very first complete Zeke captured by allied forces. Later in October, just 3 months after the Akutan Zero was discovered in Alaska, KMT forces captured another A6M at Hainan and transported it back to Guilin (now also in Guangxi) for studies as well, these 2 Zekes served as the few examples for the allies to exploit the flaws of the "invincible Zeke".